Never have so few done so much for so little. In Mexico City, the Ochoa family operates a private ambulance service that survives, barely, by virtually begging critically injured patients to pay. Sometimes they do pay, and then local police bust the family for operating an unlicensed ambulance and take everything they have collected. Their bedside manner is as funny as it is touching, as reckless as it is lifesaving. Nobody wants their ride until they are bleeding, concussed or have a bone sticking out. Then they take the ride and stiff their lifesaver.

At a population of about nine million, Mexico City could use more than 45 emergency ambulances. As the movie tells it, the number of government hospitals is about proportional to the ambulances. Critical patients wait an hour for an ambulance and then longer to get treated at the hospital. Private hospitals and ambulances fill this scary gap while operating in a shadowy game of cat and mouse with law enforcement. They save lives by being fast rather than being skilled. If you are dying, you might prefer the former over the latter.

Private hospitals pay the Ochoas for bringing patients through the door and the Ochoas pay police for tips on assaults and car crashes. If patients insist on going to a public hospital and then do not pay the family, the police arrest them for the violation of the day and take whatever money they find. Money that might have gone for, say, food.

It is like Peace Corps without the food and shelter except you get an ambulance to sleep in. Apropos of that, director, cinematographer and editor Luke Lorentzen filmed about half of the movie in the claustrophobic confines of the ambulance. The two front seats are the easy chairs of father Fernando and CEO 17-year-old Juan. Juan drives while dad screams into the loudspeaker mike for cars, bikes, pedestrians, buses and everything else to get out of the way of the careening aid wagon. Periods of intense excitement and real life heroism alternate with pre-teen Josue playing soccer in the back of the ambulance and hiding in a cupboard about two feet on a side when the police bust the family.

As a documentary completed on a beer budget, this film is a beautiful work of art. It combines every aspect of childhood and young and mature adulthood on the streets and in a moving machine. Charles Burnett, director, producer, cinematographer and editor of the legendary docudrama “Killer of Sheep” could not have said it better. The machine is the office and, as often as not, other machines like it cause the bloodshed that is the family’s daily bread.

It is not an easy life, but it is testimony to human adaptability that it has been made to work. A vibrant and intimate slice of life and a riveting use of the camera to show a side of making a living that nobody would otherwise see. 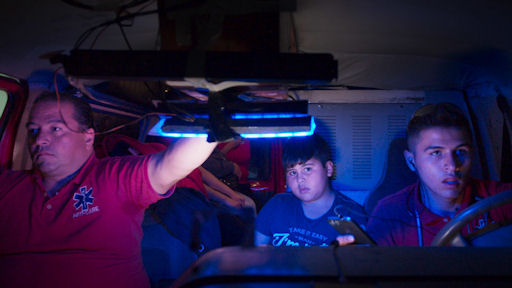