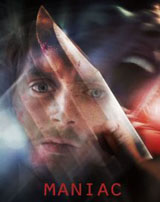 Slasher flicks are not new on the market, nor will then soon be dismissed by horror fans. Buffs of the genre will watch a slasher film whether they are predisposed on their opinion of how good the movie will be. Once in a while, we are pleasantly surprised when a film of this nature turns out to actually be really good and smart and thought provoking. If I may be so presumptuous to say, from the trailer for “Maniac,” which is a re-boot, I believe this is one such feature.

Mannequins creep me out, always have. Serial killing does not fair well on my nerve meter. Scalping, yikes, I don’t know anybody who is keen on it. Photography can be beautiful, or it can be absolutely frightening. For all intents and purposes of “Maniac,” it is frightening. Throw a pretty girl and Elijah Wood into the mix, and that’s a fine cocktail for a horror drunk.

The trailer boasts some unsettling music consisting of reverberations, coupled with some quick cuts and flashes. There is nothing out of the ordinary for a horror trailer. Background screaming as words flash across the screen, atypical. Cue a quick transition into a slower paced, piano drawn and almost soothing sounding music peace and images of Elijah Wood, and there it is, the insinuation that there is an actual story here. Steadily we jump into a rock track and visuals of half naked women and the synopsis begins to unfold. Eerie images of a mannequin’s nose being caressed as well as points of view from Wood’s character Frank pass over us and I am completely drawn into this world. Wrap it up with a montage of things we can expect of the film and there you have a nicely done trailer.

The trailer strokes Wood’s acting chops and I concur with what I have seen thus far. This isn’t just a horror film, there’s the possibility and probability that some acting actually happens. I know, I know … it’s not the first thing one thinks of with these types of movies, with exception of course.

Premiering at the Chicago International Film Festival in October of 2012, “Maniac” was nominated for best horror film and was widely received in several festival circuits. The film actually had some history to overcome, as the 1980 original has been regarded as one of the best slasher films of all time. It’s cult following has maintained to this day. Regardless, this reboot as it’s being referred, holds its chops, despite the fans who were not so thrilled about a few changes to the new vision.

“Maniac” is definitely one that I will watch, and can only hope it’s not a total disappointment. I am very interested to see how Elijah Wood portrays this character, a Jack the Ripper of LA, as he’s been called. I want to see what he does to make a seemingly flat and one sided character pop, giving the audience a layered and dimensional being to study. “Maniac” did not gross well in the US, but this is not shocking to a horror buff. If the trailer has me hooked, then there’s an editor out there who did their job well and secured this viewer of “Maniac.”

“Maniac” is available on demand at Amazon Instant Video and iTunes.