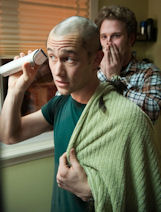 Can cancer be funny? Normally, I would say no, but Summit Entertainment and director Jonathan Levine are hoping that answer will be changed to a yes. Here is the first trailer for an upcoming dramatic comedy “50/50” starring Joseph Gordon-Levitt, Seth Rogen, Anna Kendrick, Bryce Dallas Howard, Phillip Baker Hall and Anjelica Huston.

Based on the life of screenwriter Will Reiser, “50/50” is a look at the life of Adam (Gordon-Levitt) and Kyle (Rogen), two friends who try not to let Adam’s recent diagnosis of cancer ruin their lives. It is a story about friendship, love and surviving cancer while trying to find the humor in the most unlikely of places.

I personally can relate to this story because I have had to deal with cancer, and although it can be scary and difficult at times, one constant factor that seemed to help was the love and support of family and friends. There are many similarities to this movie and my own life during that time, including shaving your head before your hair starts to fall-out, not knowing how to feel at first and trying to act as normal as possible to make things seem like they are OK. I can say that I never tried to use cancer as a pick-up line, but as we see in the trailer, it doesn’t work out so well for him anyways. This film does seem to portray some of the genuine emotions that one feels and I honestly can say that I really want to see the movie to judge whether or not it is truthful and follows the experience I had dealing with the treatment and all of the powerful emotions that seem to flood in all at once.

What do you think of the movie based off this trailer? Do you think it can make a movie about cancer honest and yet funny? Sound off in the comment section and let us know.