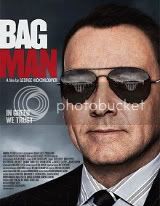 Kevin Spacey becomes the self-assured, aggrandizing, lying snake-oil salesman Jack Abramoff in all his insane duplicity and dare-devil deals in the short little snippets that tantalize us in this trailer. “Bagman” is an exposé on the life and times of one of the greatest contemporary American traitors of all time.

The soundtrack, the performance intensity, the production quality, and the script, as evidenced in this trailer, are high quality. If only Hannibal Pictures could decide on a title.

The story of Abramoff is complicated, that is true. But for the last four months there is this confusing additional swirl about the name of the docu-drama. Earlier this year a documentary by the great exposé director, Alex Gibney, was produced detailing every possible conceivable aspect of the Abramoff corruption charges. It was called “Casino Jack and the United States of Money” using Abramoff’s nickname, Casino Jack.

However, when the doc came out May 7, we started hearing about a second attempt at explaining the complicated Abramoff scandal, a feature film starring award-winning actor Kevin Spacey. This film was called “Casino Jack” — much too close to the doc title.

To add to the confusion, word was out that there was a title change on this new feature film, from “Casino Jack” to “Bagman.” But Hannibal Pictures soon came out to report that “Bagman” was only being used as a title in foreign distribution, probably, we might conjecture, so that it did not get confused with Gibney’s documentary. Domestically, Hannibal announced, “Casino Jack” was still being used – though you may note that the title for their trailer still reads “Bagman.”

Whatever happens, the story of Jack Abramoff is very important because it exposes a weakness in the US political system. As long as it takes bazillions to run for high office, the lure of the lobbyist who promises extraordinary funds in exchange for votes on certain measures is hard to ignore.

Not coincidentally, Hannibal Pictures is working to get this film released October first, just before this year’s elections, to damage Republicans, who, in this story, are the most involved, as Abramoff was a conservative leader.

While being incarcerated for the last four years (he is due out this December), Abramoff has been busy playing off all the media deals coming his way. At one point he was scheduled for an interview sequence with Gibney’s documentary crew. Then suddenly he cancelled any access to himself for Gibney’s cameras and became exclusive property for the Hannibal crew. What happened there?

Here’s what I trust, kind of. Kevin Spacey, a liberal Democrat, will probably not compromise on making Republican Abramoff and his conservative dingbats look good in any way. It is true that he met with Abramoff in prison, and it is true that there are reports that they got along. But everyone gets along with Jack. I don’t think for a moment that Spacey will let him off the hook and portray him any better than he is.

Based on this slick trailer, this feature film promises outstanding acting and pacing. I know I got lost in all the facts and information crammed into the documentary, so I am hoping that the Hannibal crew, beginning with the writer, has made not only the situation with Abramoff understandable, but the basic problem with lobbyists and their potential to corrupt a democratic system clear enough so that we are assisted in our voting next November.