One word comes to mind after watching the teaser trailer for “Kung Fu Panda 2: The Kaboom of Doom”: hilarious. 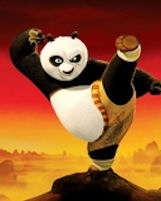 Just as the trailer dictates, the awesomeness returns next summer and if the sequel is as amusing as this teaser, the second film will be as funny as the first. The characterization of Po is as vibrant as ever and his movements, fluid. Perhaps another Academy nomination is in the future for his Dreamworks.

Oh, those witty writers. I wonder if Jack Black came up with that bit himself. Speaking of which, of course he’s back to voice Po and also returning is The Furious Five voiced by Angelina Jolie (Tigress), Lucy Liu (Viper), Jackie Chan (Monkey), Seth Rogen (Mantis) and David Cross (Crane). But wait, that’s not all! Rounding out the amazing voice talent are the outstanding Dustin Hoffman and Gary Oldman, martial artist and actress Michelle Yeoh and the legendary James Woods. Jean-Claude Van Damme is also listed amongst the impressive cast.

I think the plot for “Kaboom of Doom” sounds great. Now that Po is a Dragon Warrior a new villain emerges whose goal is to rule China and destroy Kung Fu. Oldman is the voice behind the baddie named Lord Shen, which makes me all the more anxious to see this movie.