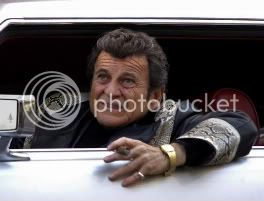 You may think this is a grown-up version of the “Sesame Street” game “One of These Things Is Not Like the Other.” But, it isn’t. Those three words actually go together in director Taylor Hackford’s new film “Love Ranch.”

In the movie, Pesci and Mirren play husband and wife Charlie and Grace Botempo, a couple who opened the first legal brothel in Nevada (the movie is based on the lives of Joe and Sally Conforte). In the trailer below, we see what life is like at the Love Ranch in Reno … full of the flashy costumes of the Love Ranch’s “ladies of the night” … and Charlie’s affairs with them. Keep your eyes out for Gina Gershon and Taryn Manning as two of the pretty prostitutes.

Charlie tells Grace one day that they are going to sponsor an Argentinian fighter named Armando (played by newcomer Sergio Peris-Mencheta). Armando comes to stay at the ranch and becomes a little flirty with Grace, although Dame Helen Mirren tells him, “I’ve got 25 psychotic whores to manage. That’s a full dance card.”

But in the trailer we see Armando continues to successfully woo Grace, despite the fact that she is much older than him, as she points out, and that he is being paid by her husband. And as we know, Pesci doesn’t play shrinking violets. When Charlie finds out about his wife’s affair, even though he’s had plenty of his own, he pretty much goes crazy.

Moviegoers will want to check into this “Love Ranch” when it is release on June 30.