A Trailer for ‘The Phantom Menace’ in 3D

George Lucas — who has always enjoyed pushing boundaries and exploring new territory — is re-releasing all six films from the “Star Wars” saga in spectacular 3D. Beginning with “Star Wars: Episode I — The Phantom Menace” this February, we will see all of the films back on the big screen once again.

Watch the announcement trailer for the re-release below.

Originally released in 1999, the first of the new trilogy was panned by fan boys everywhere who cried outrage over the movie being filled with kid-centric gimmickry. Fans said the film lost the focus and fun of the original trilogy. While not the best of the three new films, it did set up the story and the mythos of the Star Wars world that our favorite characters have come to live in. 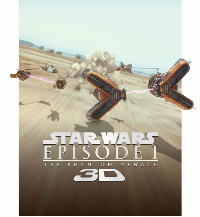 This 3D re-release presents a chance for a whole new generation to experience the “Star Wars” saga on the big screen for the first time. And 3D is an added bonus for the young ones to feel truly immersed in this universe.

Truth be told, I am excited to see all of the films on the big screen once again, but, unfortunately, “Star Wars: Episode I — The Phantom Menace” is my least favorite of the six films. It should be interesting to see how well the 3D is done — after all, I’m sure George Lucas took more care with this post-production 3D than Warner Bros. did with “Clash of the Titans” in 2010, and look how well that film did worldwide.

With no definitive schedule for the 3D re-release of the rest of the Star Wars saga, it is hard to say when you will be able to see the other five films in theaters, but they will be coming in the next few years.

You can catch “Star Wars: Episode I — The Phantom Menace” in 3D in theaters starting Feb. 10. So, will you pay to see any of the films in theaters once again and does the added 3D make you want to see them more than if they weren’t 3D converted?