Judging from the trailer for “The Romantics,” I imagine the pitch for the film went something like this: 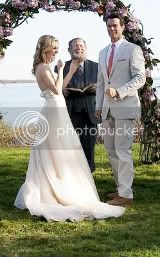 DEVELOPMENT EXEC: Yeah except it will be a wedding and not a funereal.

PRODUCER: Okay, that could work.

PRODUCER: The third male lead in “Transformers”? Behind the kid with who looks like a pug and the giant robot?

DEVELOPMENT EXEC: And there’s more! The female lead will be America’s sweetheart, Katie Holmes! She’s in love with Josh’s character, who is supposed to be marrying Anna Paquin.

PRODUCER: Wait, Anna Paquin is the sweetheart. She’s Sookie! So cute and sweet, and she gets to make out with that hot vampire. No one likes Katie Holmes and her man jeans.

DEVELOPMENT EXEC: Well, they will love her again in this film! Right after she sleeps with Josh before he’s supposed to marry Paquin’s character.

PRODUCER: The woman who people think is controlled by Tom Cruise is going to earn the viewer’s sympathy by … stealing Sookie Stackhouse’s fiancé?

DEVELOPMENT EXEC: OK, but we have some other big stars lined up! Adam Brody! Elijah Wood! Malin Ackerman!

PRODUCER: Drawing a blank. What is this movie even about again? I can’t remember.

DEVELOPMENT EXEC: Ok, I’m going to level with you. We have a pseudo-romantic comedy that we can stick into a dead movie period and draw the crowds that would normally being seeing whatever Kate Hudson is shilling.

PRODUCER: Alright. Stick some Coldplay music in the trailer and call it a day. Oh, and see if Candice Bergen is around. Maybe she can act her way out of this thing.

“The Romantics” also stars Jeremy Strong and Dianna Agron. It premiered at the 2010 Sundance Film Festival and will be released Sept. 10.