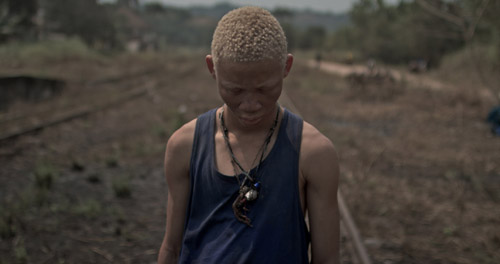 Conjuring aggression and beguilement, death and trickery, survival and provocative bedevilment, this great title headlines the most important film venue of the year, the 2012 Human Rights Watch Film Festival (HRWFF).

Opening night of the festival will feature the acclaimed “War Witch.” The film’s trailer begins with drums played by children and the narrator’s announcement that she is pregnant and must tell her unborn baby her story. She is worried she won’t be able to love. Why?

The HRWFF travels the globe promoting world awareness on international peace and justice issues. In this film about child soldiers, there is the odd introduction of an albino, a racial phenomenon in both Tanzania and the Congo. Magic stories connect albinos with good luck, so in real life these people are hunted down for their limbs. In order to save them, both Congolese and Tanzanian governments have them live on protected reservations. From the trailer, it looks like this magical yet ostracized community may provide some parallels to the life of our young protagonist.

“War Witch” garnered acclaim at both the 2012 Tribeca and Berlin Film Festivals, where the girl playing the young witch, Rachel Mwanza, won the best actress award. Kim Nguyen, the film’s director, reports he recruited her from a community of street dwellers in the Democratic Republic of the Congo. He has also reported that Mwanza “is the first African actress to ever win the Silver Bear for best actress at the Berlin International Film Festival. Her presence and charisma on screen is reminiscent of great actors such as Brad Pitt and Meryl Streep … Her aura on the screen is just mesmerizing!”

Background info about the film, which also won Best Narrative Film at the Tribeca Film Fest, reveals that the fictitious young girl Mwanza plays grew up in a happy little village family. When she was 12, rebel forces invaded and changed her life forever. Now, she is left to explain herself to her unborn child. Guns, jungle, tears and a strange youth with blond hair are set to the ominously tragic music of Edvard Grieg’s “Death of Aase.”

Nguyen has reported that he sees “War Witch” as a story about the resilience of the individual, community and general fabric of society in general. From the trailer, I see it as an example of extraordinary film-making.