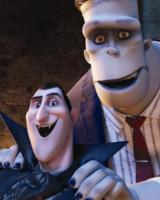 “Hotel Transylvania” – the record-setting 3D computer-animated monster comedy from Sony Pictures Animation that ranked as the biggest September opening in movie history and the best opening ever for the studio – is releasing a new animated short as a special Halloween treat.

Entitled “Goodnight, Mr. Foot,” the short stars none other than the legendary monster Bigfoot, and follows his adventure as he, too, checks in to Dracula’s five-stake resort in search of a little R-and-R, only to find himself faced with an enthusiastic witch-maid, eager to make Mr. Foot’s stay a memorable one.

Genndy Tartakovsky commented, “After we finished ‘Hotel Transylvania,’ I got an itch to animate! Taking inspiration from my favorite directors Bob Clampett, Tex Avery and Chuck Jones, I animated a short cartoon in the traditional 2D style. It was difficult and exhilarating all at once and I hope people will enjoy it as much as I enjoyed making it.”

To commemorate the debut of the animated short, an exclusive new collectible one-sheet — designed by Tartakovsky himself — will also be given away at all showings of “Hotel Transylvania” in Carmike Cinemas nationwide from Oct. 26 (while supplies last).

“Hotel Transylvania” fans surfing the internet might just keep any eye out (not literally!) for a specially-created promo video popping up some time around Oct. 31 (date TBD).

The feature film debut of Genndy Tartakovsky, Sony Pictures Animation’s “Hotel Transylvania” proved to be the biggest September opening for a film in U.S. history, and went on to open No. 1 in many territories around the world, including Argentina, Brazil, Bulgaria, Colombia, Ecuador, Malaysia, Mexico, Peru, Philippines, Romania, Russia, Slovenia, South Africa, and Sweden.