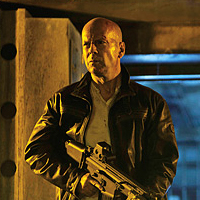 “Try not to make a bigger mess of things” Lucy McClane (Mary Elizabeth Winstead, returning from “Live Free or Die Hard”) tells her father, John McClane (Bruce Willis), as she drops him off at the airport en route to Russia.

It seems, though, that John McClane can’t stay out of trouble and “not make a bigger mess of things.” Upon arrival to Moscow, McClane witnesses a motorcade explosion and the bad guys hiding out in an armoured truck until it’s time for them to strike.

As always, our trusty trouble magnet is center of all the action. This time, though, he is joined by his estranged son John “Jack” McClane Jr. played by Jai Courtney, best known for his role as Varo in the Starz original show “Spartacus: Blood and Sand.”

John Jr. apparently has gotten in with the wrong crowd and we see him driving the armored car that John Senior stops after the motorcade explosion. The apple does not fall far from the tree, because John Jr. is as adept as dad with automated weapons and falling from extreme heights.

Of course, it would not be a “Die Hard” film without lots of explosions and gun-fighting scenes or even the sarcasm that oozes from Willis’s character. This first trailer of the film gives the fans all the elements that are necessary to make it a “Die Hard” fan’s dream. But is a fifth film in the series really quite necessary?

We met McClane’s daughter very early in the series, but the introduction of a son that I don’t quite recall ever even having heard mentioned in previous films is, well, iffy in a ploy to continue the series. What do you think of a fifth Die Hard film? Let us know in the comments section.