You’ve heard of the Dog Days of Summer? Well, for three evenings in November, the Hallmark Channel is inaugurating the Dog Nights of Autumn. The network is celebrating four-legged friends from Tuesday to Thursday, Nov. 6 to 8, from 6 p.m. thru midnight ET/PT each night.

How is the channel celebrating? With dog movies — lots and lots of films featuring and starring canines of all breeds and temperaments. The reason for all of the dogged cinema is Hallmark Channel’s special exclusive presentation of the 2012 American Humane Association’s Hero Dog Awards on Nov. 8 (8 p.m. ET/PT, 7C). But before and after that, it will be wall-to-wall dog friendly films.

The fur starts to fly on Tuesday at 6 p.m. with the 1996 live-action feature version of “101 Dalmatians,” starring Glenn Close as Cruella De Vil. Jeff Daniels, Joely Richardson and Joan Plowright co-star in the family tale of an evil woman who kidnaps puppies to sell them for their fur.

Then at 8 p.m. that same night, Hallmark Channel presents an encore showing of “Puppy Love,” its popular 2012 Original World Premiere Movie starring Candace Cameron Bure in the story of a big sloppy dog who brings love to the life of a single mom and a handsome ballplayer (Victor Webster).

That’s followed at 10 p.m. on Nov. 6 by “You Lucky Dog,” a 2009 Hallmark Channel Original Movie featuring Natasha Henstridge, Harry Hamlin and Anthony Lemke – but whose real star is a sheepdog named Lucky. That inconvenient hound will become a hero before the charming film is done.

On Wednesday, Nov. 7 at 8 p.m., audiences will be treated to the moving 2009 feature “Hachi: A Dog’s Tale” (pictured at right), which stars Richard Gere and Joan Allen in the unforgettable story of one Akita’s magical loyalty to his master and the family that adopts him after tragedy strikes.

At 10 p.m. that same night, viewers will experience the 2008 Hallmark Channel Original Movie “Accidental Friendship,” which stars Chandra Wilson of “Grey’s Anatomy.” Wilson plays a homeless woman who befriends a police officer. Ben Vereen also makes a cameo in a movie that shows the special bond one woman has with her beloved dogs.

That brings us to Thursday, Nov. 8, when things get started at 6 p.m. with a repeat showing of “Hachi: A Dog’s Tale,” followed at 8 p.m. by the World Premiere of “Hero Dog Awards.” The awards, the second annual presentation, honors four-legged heroes for their service to mankind, paying tribute in categories including Service Dogs, Military Dogs, Guide Dogs, Emerging Hero Dogs, Therapy Dogs, Law Enforcement/Arson Dogs, Search and Rescue Dogs, and Hearing Dogs.

The evening wraps at 10 p.m. with a showing of “A Dog Named Christmas,” from the 2009 Hallmark Hall of Fame Collection. It features Bruce Greenwood in the tale of a developmentally-challenged young man (Noel Fisher) who works to convince his rural community to participate in a local shelter’s inaugural “Adopt a Dog For Christmas” program. 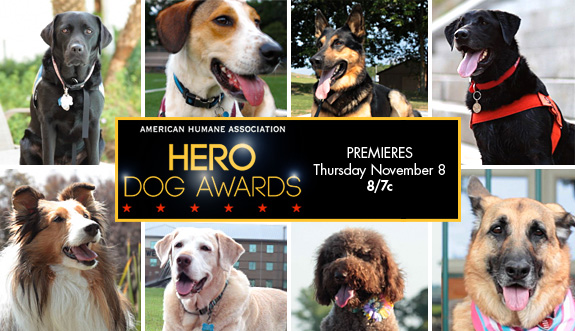