What constitutes the concept of great art? What qualifies my sculpture, my oil painting or my collage as a personal experiment and Claude Monet’s as classic impressionist expression?

Why is your kindergartner’s art “developing” and Picasso’s worth millions?

Louise Bourgeois has said that artists are working to understand themselves and that great art is the communication of the subconscious with the universal. She will draw or build something without knowing why, sometimes repetitively recreating the image, until she understands what she is saying to herself. Because of her genius, her ability to communicate in various art forms her core consciousness, she connects with a wide variety of patrons.

Mark Hogancamp’s work is similar in this way. He repetitively creates scenes and stories about relationships, longing, conflict and loss. But what is most noticeable is his recurring documentation of threatening encounters.

Mark Hogancamp suffered memory loss due to a late night frenzied attack by five men outside a bar. He is lucky to be alive. After nine days in a coma, several surgeries and 40 days in a hospital, 46-year-old Hogancamp was released to begin his life anew – learning to walk and talk all over again.

Since he has no memory of his past or what he was like, he now makes it all up.

There is a hobby shop in his small upstate New York town where he buys dolls and other miniature accoutrements. He built a church, a bar and other buildings outside his trailer home, creating a little folksy European town for his characters. He names it for himself and two foxy women who are main players in this town whose city sign reads Marwencol, Belgium.

The doll representing him is a handsome Ken-doll (I think) dressed as a WWII American Army GI who gathers with the townspeople at his cat-fight bar. He has created stories of what happens in his town, manipulating his dolls to portray each part. As he imagines and sequences their adventures, he photographs them.

At some point, someone in the art world heard about Hogancamp’s imaginative creation, visited his “town” and determined his photography and fabricated world constituted authentic, outstanding art. His alter-reality was featured in Esopus Magazine and then his photographs and town structures were displayed in a Greenwich Village gallery.

Concurrently, Jeff Malmberg, the filmmaker of “Marwencol,” filmed this documentary of Hogancamp’s life and art over a period of four years. The viewer understands that Hogancamp’s fictional storylines for his dolls mirror his own internal issues.

For example, Hogancamp’s town harbors Americans and Europeans under the constant threat of the ruthless German SS. The latter, he admits, represent the five guys who attacked him that chillingly cold winter night in 2000.

As Marwencol is perpetually under siege by SS forces, Hogancamp repeatedly relives ways to overcome being a victim in his self-constructed world. While no one came to his aid at the bar the night he was beaten and left for dead, beautiful, sexy, strong women are always coming to his rescue in one way or another in this new town.

Hogancamp’s overall theme is a kind of dying and rising. His memory was obliterated, but through resilience and adaptation, he rises. He creates a new world, and in this one he doesn’t let himself be the victim. Violent things may happen, but Hogancamp, the overseer, is literally the mastermind of everything that occurs, including the happenstance of the swinging SS bodies hung upside down in Marwencol’s streets.

The viewer of this film is mesmerized by the intimacy obtained in the exposure of Hogancamp’s innermost subconscious musings. We’re not sure if this is an invasion of an innocent man’s privacy, a great new psychological therapy, or an exposé on the life of a significant artist.

But Hogancamp is also something of an exhibitionist. Marwencol is located outside his trailer home for everyone to see. He openly talks about his dolls and stories and he walks several miles a week along the country roads trailing a jeep with four of his outfitted dolls. He’s making sure the tires look realistically worn while he practices regaining his own balance and physical endurance walking the white line at the side of the road.

A Washington, D.C., art curator and my art mentor has mentioned that Hogancamp’s work on the Esopus website looks “pretty great” and that he is “inclined to take his work seriously.” Interestingly, he also notes that he has an artist friend whose work dramatically improved after she suffered a stroke and couldn’t even talk for several months. Assuming that psychological or physical impairment precluded an individual’s artistic genius would open up quite a conversation.

Throughout the film, the viewer does not forget the reason that Hogancamp creates his own world and stories. Clinically, some might think he’s pretty nuts, though in a kind way. But you know, who is really nuts — him as he is now or the five dudes who blasted away his whole body without conscience?

A last point. At the request of the filmmaker, reviewers are respectfully requested to refrain from revealing details of a surprising and further revealing aspect of Hogancamp’s life. This parallel subplot deepens the importance of the film and allows the viewer an additional dimension into the interpretation of Hogancamp’s unusual, but therapeutic, art form.

A winner of 12 film festival awards, this trailblazing doc is like none you have seen before. See it and then reflect on building your own city, creating your own characters and manipulating your own relationships. Isn’t this something we all want anyway, to be the mastermind of our own destiny – if not the world’s? “Marwencol” is story of a quirky genius at work with instruction for everyone. 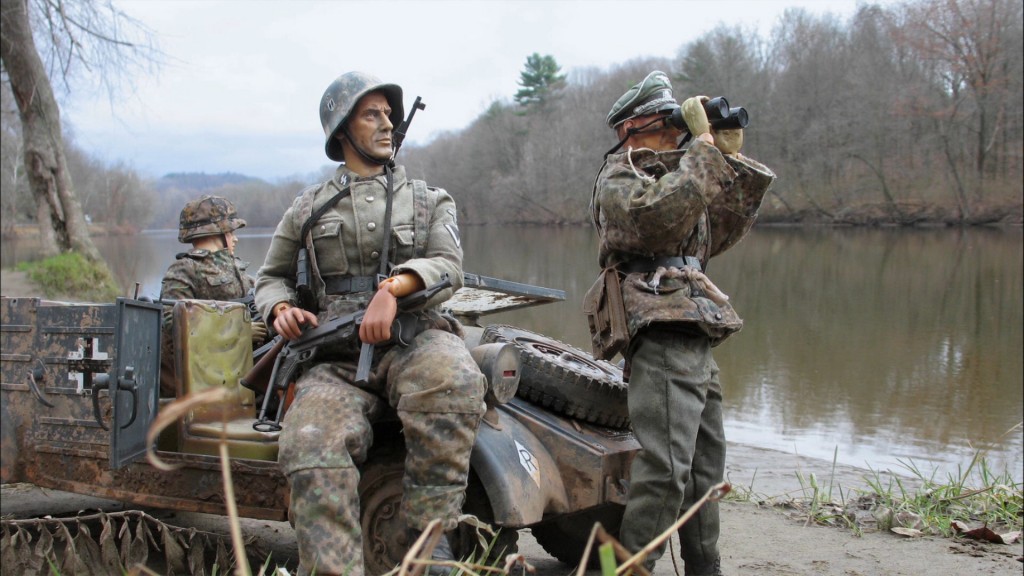 Mark Hogancamp currently has an art show at Esopus Space in NYC.