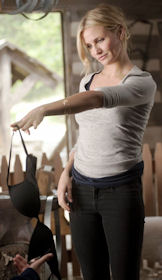 Elizabeth Halsey (Cameron Diaz) thinks her life is set — until she finds out her rich fiancée is breaking off the engagement and dumping her. Elizabeth has to go back to work as a high school teacher, but she’s not very committed to her kids and she never puts forth the effort to actually teach them. Her constant search for a sugar daddy continues and she believes if she gets breast implants, it will be that much easier to find and marry a wealthy man.

Things don’t go as planned as she has a rival in an over-dedicated perky teacher named Amy Squirrel (Lucy Punch) who is out to get her. She also has to deal with a gym teacher named Russell (Jason Segel) who won’t stop hitting on her and a roommate, Kurt (Eric Stonestreet), she found on Craigslist who can’t even afford rent. Complications arise when Scott Delacorte (Justin Timberlake), a new teacher, arrives at the school and both Elizabeth and Amy both set their sights on him.

With crazy rivalries, drunken rages, abusive behavior towards her students and just a general lack of caring, Elizabeth Halsey might be the worst teacher ever. That is until she learns of a bonus to the teacher whose students score the highest on the state exam. Can she turn her class around in time to win the money she desperately needs for her surgery?

Falling somewhere between the tone of “Bad Santa” and “Bad News Bears,” this new dark comedy directed by Jake Kasdan (“Orange County”) is a hard movie to critique since it has so many great comedic actors in it, but the main characters are so unlikeable it is nearly impossible to root for them. Liz (Diaz) hates her job and her students and just dreams of escaping her life to be taken care of by a rich husband. Amy Squirrel is out to get her from day one and will do whatever she deems is necessary to convince everyone else at the school that Elizabeth is a “Bad Teacher.” Scott (Timberlake) comes in as this rich nerd who just enjoys teaching and we are led to believe that he is a decent guy who just wants to find love, but he may be exactly what he seems.

The acting in this movie is fine, where it falls flat is in the writing and plot. It seems that all of the funniest moments were in the trailer and that is just sad. While watching the film, the average movie-goer might not see every joke or gag coming, but the end result and character revelations are obvious from the start.

Now, besides being pretty predictable not that funny, the highlight for me wasn’t Diaz or Timberlake, but all of the supporting characters like Jason Segel as Russell the gym teacher. He was the most genuine, believable and honest person in the film. Wearing his heart on his sleeve, he makes no attempt to hide his attraction to Diaz, but another part of him that I liked was his comedy and attitude. Liz is constantly insulting him and it doesn’t even faze him, he knows it is her defense mechanism to keep people from getting too close to her.

A few other great performances in this mundane film are by Phyllis Smith (of “The Office”) who plays the shy teacher, Lynn Davies, who adores Liz and tries to take on a bit of her rebellion but doesn’t feel comfortable with it. We also see John Michael Higgins as Principal Wally Snur, a somewhat dim-witted educator who has an obsession collecting odd figurines. As always Higgins brings a peculiar type of energy and comedy to his role and I enjoyed seeing him as the principal. We get a few fun cameos with Molly Shannon as the super perky Mom of a student, and a few others mixed into the film. The children who play the students in the film do an OK job, but having such blatant stereotypes and characters we don’t get much out of them either.

The comedy in this film is dark and somewhat gritty but I think it could have been much funnier if they let the actors do some improvisation with their lines and gone even darker with the comedy. Yes, this film is rated R, but that could be just because the massive amount of drugs and alcohol shown in the film plus the language and sexual content. It didn’t feel like it had the outrageous-ness that most jokes in R-rated comedies do.

My verdict is to wait for it to be at your local store to rent; believe me you will enjoy it more at home knowing that you didn’t pay full price admission and that you can turn it off whenever you want to.

“Bad Teacher” is in theaters now.