Under Review: ‘Griff the Invisible’ 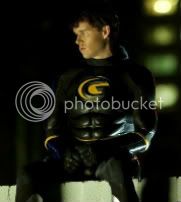 While the superhero genre is in full swing, there is a growing sub-genre focusing on everyman superhero films — such as “Defendor,” “Kick-Ass” and “Super” — in which an average person puts on a costume and fights crime to escape some part of their mundane lives. The newest addition to this genre is “Griff the Invisible,” which comes from writer and director Leon Ford who is known primarily for his acting in Australian television and most recently directing a few short films.

“Griff the Invisible” starts off by showing Griff (Ryan Kwanten) in action as a costumed superhero by night and a lowly office worker by day. In that second guise, he is bullied and humiliated by a co-worker Tony (Toby Schmitz) on a daily basis. Griff seems to live in another world inside his head and is constantly reminded by his brother Tim (Patrick Brammall) that he needs to live in reality. A secretive lonely side to Griff’s existence is revealed when we see him alone in his apartment night after night, never really interacting with anyone around him at all.

His life drastically changes when he meets his brother’s new girlfriend Melody (Maeve Dermody) and has an instant connection. Melody is a scientist who also is a bit “off.” She spends her days testing particle theories and trying to walk through walls and other seemingly strange behavior. Melody and Griff have an instant connection and Melody turns her affections quickly to Griff, who denies her at first but their chemistry is too strong to ignore. He eventually tells Melody his secret and she goes along with it helping him to create a larger fantasy world to explore.

When police reports pop-up asking for the public’s help in finding a masked man in a rubber suit who has been seen attacking people in the dark alleys of the city, Tim knows his brother is back to his old tricks again. With pressure from his brother, his job and now the attention of the police on him, Griff must figure out what is truly important to him.

Fans of Ryan Kwanten from HBO’s “True Blood” will be very surprised to see a major departure from his character Jason Stackhouse to the very meek Griff. His transformation is amazing as he embodies this mild-mannered social misfit. Although the film doesn’t boast the action of “Kick-Ass” or the bloodiness of “Super,” what it does do is construct a love story at its core and a message of finding acceptance with a kindred spirit. The chemistry between the two leads is matched by the quirkiness of the characters they play. The film, although slow at times, really focuses on the daily struggles of those whose minds seems to wander through the child-like fantasies and often don’t connect with reality. We see the world through Griff’s and Melody’s perspective at times, and then through those around them at other times, which shows the massive difference between a “normal” perspective of the world and that of Griff and Melody.

In addition to the work done by the lead actors, we get some great performances from: Marshall Napier as Griff’s boss; Heather Mitchell and David Webb as Melody’s parents; and Kelly Paterniti and Kate Mulvany as Griff’s office co-workers. Although I am not familiar with any of these Australian actors, I appreciated each of their contributions to the film.

The film has a darker and more dramatic feel than I expected before seeing it and a lot of the humor you can tell is probably native to Australia. I found the story and characters intriguing and enjoyed the many point-of-views that life was shown through, the humor and the way the film was shot and edited kept me interested and overall the acting was spot on for this intrepid approach to a burgeoning category of film.

“Griff the Invisible” is open in limited release now and will be hitting DVD shelves this November.