Under Review: ‘Queen of the Sun’ 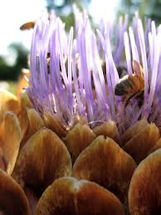 What happens when the one you love, the one you trust to always be there and the one who gives you sustenance disappears without a trace? “Queen of the Sun” is a delicate, sensitive, tender love story of nurturing and interdependence portending a great tragedy.

The human foodchain is dependent upon the cooperative, goodwill enterprise of the earth’s great pollinators. The primates as well as their food source are dependent on tiny little beetles, flies and bees. The most famous pollinators are the honeybees who sustain us through self-sacrificing travail in their busy communities.

However, the inauspicious message of “Queen of the Sun” is that the honeybees are dying off. We’ve lost an estimated 5 million colonies, each having up to 60,000 bees. Thousands of beehives in America and Europe have been found empty in the last ten years.

“Colony collapse disorder is the bill we are getting for all we have done to the bees. A hive is found empty. The food is there, honey is there, the hive is there — but the bees are gone. Who is responsible? What is the cause?”

It’s explained that the bees’ crisis is our crisis. Bees are the canary in the coalmine. They are telling us something — but what? Why are they dying?

However, there is a kind of hope. New Zealand and Australia are not experiencing the same bee colony collapse being seen in the U.S. and Europe. Beekeepers from those countries are interviewed and the audience hears how differently our friendly workers, the honeybees, are treated down under.

A beautifully-photographed film with a lovely score created by Jami Sieber, “Queen of the Sun” not only tells the story of America’s and Europe’s honeybees, at the end it lists the following ways these bee friends can be helped.

How to Help Honeybees

1. Grow flowers, plants and herbs to provide provide food for bees.
2. Eliminate pesticides in your garden and lawn.
3. Bees are thirsty. Provide a continuous shallow basin with clean water in your garden.
4. Buy directly from a local beekeeper who avoids chemicals and produces raw honey.
5. Eat organic and pesticide free food.
6. Become a beekeeper with sustainable practices

“Queen of the Bees” is playing this week in many theaters in anticipation and celebration of National Pollinator Week, June 20-26, 2011. This beautiful film, produced by Jon Betz and directed/produced by Taggart Siegel, has so far won nine awards and was selected as a feature in the International Documentary Film Festival in Amsterdam.