Under Review: The Box 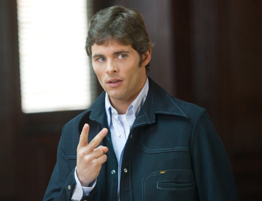 What happens when you open the box? In the case of Richard Kelly’s new film, you get a talented cast wasted in an uneven movie.

The latest sci-fi thriller from the writer-director of “Donnie Darko” and “Southland Tales” centers on Norma (Cameron Diaz) and Arthur (James Marsden), a married couple having financial difficulties. One day, Arlington Steward (Frank Langella), an ominous man missing half of his face, stops by their house to deliver a box with a single red button inside.

If Norma and Arthur push the button, two things will happen: They’ll receive a cash payment of $1 million and someone who they don’t know will die. Arlington tells Norma they have 24 hours to decide before he will retrieve the box, reprogram it and make the offer to someone else.

As Norma and Arthur try to decide if they could live with being responsible for someone’s death in order to provide for their family, they begin meeting a number of strange characters who appear to be in a trance-like state, flashing them the peace sign with blood trickling from their noses. They discover nothing with the box is as simple as it seems as they investigate Arlington’s mysterious employers.

My biggest problem with “The Box” is that it felt like two different movies. The first half is more what I expected from the trailer. The box is introduced almost immediately, so there is instantly a sense of foreboding and dread. There is a slow yet suspenseful build to the moment when Norma and Arthur decide whether or not to push the button, but that’s when the movie takes a turn for the worse.

I expected more of an understated brand of suspense, more reminiscent of Hitchcock or “The Twilight Zone” (the same urban legend that inspired this movie was used in an episode of the series). It started out promising, but halfway through the film the story transforms into over-the-top gimmicks. The story gets progressively weirder and veers further and further from the more subtle tone established earlier in the film. People in the audience at my screening actually laughed out loud at the film’s increasing absurdity.

Kelly showed such promise with the cult classic “Donnie Darko,” which although it was extremely convoluted was also fresh and creative. Audiences go into that movie knowing it will be bizarre. But “The Box’s” out-there second half feels out of place because the story isn’t set up for such outrageously excessive twists. Its offbeat tangents come as a complete surprise, and as a result the story feels uneven.

Kelly seems to be turning into the M. Night Shyamalan of sci-fi — he had one brilliant film before heading progressively downhill with his follow-up efforts. Only time will tell if Kelly’s next project will be more promising.

There were a few positives to the film in addition to its stronger first half. Marsden and Langella turn in strong performances as usual, while Diaz is decent except for her attempt at a Southern accent. The film also has a wonderfully eerie score courtesy of Win Butler, Regine Chassagne and Owen Pallett of Arcade Fire. And even though the film ends poorly, it does raise some interesting moral questions.

So what do you think about “The Box?” Would you press the button? Sound off in the comments section.