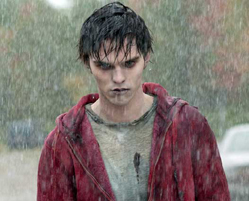 If you are still on the fence about whether to head to a movie theater Feb. 1 to see “Warm Bodies,” Summit Entertainment has released the first four minutes of the film to help you decide.

There are many scenes and voice-overs that we’ve seen already from the initial trailer released a month ago, but actually seeing the scenes with the voice-over is quite entertaining. I like a good parody just like everyone else, so if the first four minutes of the film can make you laugh, I’m hoping that the rest of the film will, too. This footage just reassures that it is a film that takes its zombie subject matter lightly.

If this is the first that you’ve heard of the film, click here to read more about the film and the see the trailer.

“Warm Bodies” was written and directed by Jonathan Levine. It stars Nicholas Hoult as the zombie R, Teresa Palmer as his love interest, Julie Grigio, and John Malkovich as Julie’s father who is leader of a group of human survivors. Warm Bodies is rated PG-13 for zombie violence and some language, so parental guidance is advised.

A funny new twist on a classic love story, WARM BODIES is a poignant tale about the power of human connection. After a zombie epidemic, R (a highly unusual zombie) encounters Julie (a human survivor), and rescues her from a zombie attack. Julie sees that R is different from the other zombies, and as the two form a special relationship in their struggle for survival, R becomes increasingly more human – setting off an exciting, romantic, and often comical chain of events that begins to transform the other zombies and maybe even the whole lifeless world.