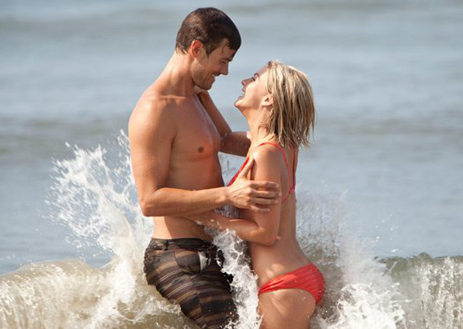 An affirming and suspenseful story about a young woman’s struggle to love again, “Safe Haven” is based on the novel of the same name from Nicholas Sparks, the best-selling author behind the hit films “The Notebook” and “Dear John.” The film’s director is Lasse Hallstrom (“Cider House Rules” and “Chocolat”).

When a mysterious young woman named Katie (Julianne Hough) arrives in the small town of Southport, N.C., her reluctance to join the tight-knit community raises questions about her past. Slowly, she begins putting down roots, and gains the courage to start a relationship with Alex (Josh Duhamel), a widowed store owner with two young children. But dark secrets intrude on her new life with such terror that she is forced to rediscover the meaning of sacrifice and rely on the power of love in this deeply moving romantic thriller.

True to the Nicholas Sparks formula, two beautiful people fall in love but one has a deep dark secret that somehow keeps them apart. In the end, though, they will overcome that obstacle and fight to stay together, because love will conquer all. So in two sentences, I may have just summarized the entire plot of the film and novel. Depending on the direction of the film, it may become another blockbuster hit for novelist Nicholas Sparks. Hollywood and females worldwide are enchanted by the tales that he weaves and this most recent adaptation of one of his novels is most likely not going to disappoint his fans.

In this trailer, Katie is seen fleeing from one town and, from what it seems, a detective of some sort who is pursuing her. It is never stated specifically what she is running from, but whatever it is, it’s pretty serious and she wants to leave it in her past until one day it finds her again. Will Katie and Alex be able to live and love as they want? Or will Katie’s past uproot her from her new life and leave the new love that she has found in Alex?

“Safe Haven” was originally slated for release in theaters on Feb. 8, 2013, but was changed to Feb. 14, 2013, making it the perfect date night movie with your special someone on Valentine’s Day in the U.S. market. Will you be going to the movies to catch this romantic thriller?