We Are the Best hits iTunes and On Demand 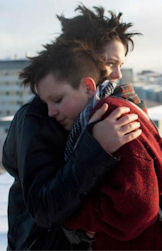 Magnolia Pictures has announced that the critically-acclaimed film “We Are the Best” is now available on iTunes and On Demand, as it continues its expansion to select theaters across the country.

From director Lukas Moodysson, “We Are the Best” is the story of three young misfits growing up in early ’80s Stockholm. Pixieish, mohawk-sporting Klara and her best friend Bobo are 13-year-old rebels looking for a cause. Despite having no instruments — or discernible musical talent — the two put all their energy into forming an all-girl punk band, recruiting their shy, classical guitar-playing schoolmate Hedwig as the third wheel.

Heading into the weekend, the film was on screen in 20 markets, with 15 more opening yesterday and a continued expansion planned into July. The film debut on iTunes and On Demand June 20.

You can read our review of the film HERE.