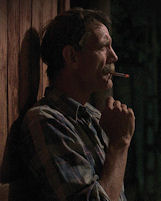 Lanky lead Meinhard Neumann plays a different kind of cowboy in “Western,” a low-key pondering of war and peace. Meinhard works on a German construction crew that must build a dam in remote Bulgaria. A self-described former “Legionnaire,” its seems he has been sent to Bulgaria by the same powerful, unseen forces that sent him to fight in the Middle East. His horse appears early in the story, accompanied by a young boy and his friends. His friends tell the boy to take the horse from Meinhard, but the boy hesitates. The horse and the man seem to go together.

So begins the slow unfolding of a screenplay that is dreamlike, at best, and drops occasionally into the nonsensical. The film walks a thin line between allowing viewers to interpret the story on their own terms and simply failing to fill in important details. The crew boss represents the West and local small-town family elders represent the East. Meinhard is in the middle, conflicted, traumatized by his wartime experiences, having a personal crisis, or all of those. In any event, Neumann’s lack of expression does not carry the day. His character should have spent less time smoking and more time acting.

Beneath the surface rumbles the crew boss and his righteous “we are here to build infrastructure,” opposing the centuries-old traditions that have governed the locals. The presence of the crew in a totally foreign environment with not even an interpreter is nonsense. At the same time as it lends itself to the dreamlike atmosphere of the film. A major conflict arises between the crew boss and townspeople when the boss steals water for the construction project. “Yes, we are behind,” he thunders into his cell phone, “but we have nothing, not even water!” At a construction site in the middle of a river this is odd, to say the least.

Writer/director Valeska Grisebach risks pushing us too far in asking for selective disregard of the facts. He is almost asking us to write the screenplay ourselves and simply admire the rest of his work. The abnormally expressionless Neumann and the sketchy treatment of the rest of the characters gives us little to hold on to. There is a fine sense of adventure in standing in the river and watching a structure emerge, but the focus is on conflict. The dam itself is never mentioned, nor are the contractual obligations of, and the benefits to, those present.

Despite the haze, legionnaire Meinhard emerges as a warrior of another kind. His horse dies and it seems like the fragile world of the townspeople and Germans will implode into the gravel of the river. The fight in his head is successfully transposed to the screen as he summons up the most Spartan of discipline, sacrificing his honor so that life can go on. The execution is lumpy and the logic is full of holes, but the message is there.