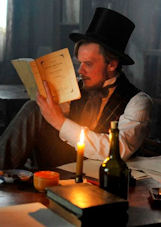 They were the best of times and, well, you know the rest. Raoul Peck follows up his vibrant Oscar-nominated “I Am Not Your Negro” with this yeasty diatribe on the eve of socialism. “Das Kapital” is brewing in a pot of larger than life characters who live for work, liberty and equality. The old are the parents you wish you had but are lucky you did not. The young are like the young we want to be, so spectacularly sure if themselves that it seems what they so fervently believe must be true.

This rocky road of doing it very wrong so one can do it very right will take everyone back to those wonderful, wacky, deep and sophomoric intellectual excursions that filled our college days. Stirling observations like “Labor is merchandise” are immediately neutralized by “Abolish money.” Nobody can get it right all the time but, regardless of the chaos in the kitchen, the meal is the food of the soul.

August Diehl and Stefan Konarske do the heavy lifting as Karl Marx and Friedrich Engels, the former a jobless journeyman firebrand, the latter the son of a textile sweatshop slave driver. The weaving factory is staffed mostly by women and children. Running in the black at a tidy profit and the red at a loss of a finger or other body part a month, Engels’ heritage is easier for him to decry as long as his belly is full. As beautiful as the costumes, and as vibrant as Diehl’s performance, Marx is a borderline sociopath who seems more interested in making his mark than establishing a utopia.

Vicky Krieps made this film just before her smashing portrayal as Alma in the heavyweight Daniel Day Lewis “The Phantom Thread.” Those who enjoyed her understated Alma will like her as Jenny von Westphalen-Marx. Her partner in social upheaval, Mary Burns, Engels lover, is well played by Hannah Steele. Sadly, there is not enough rhetoric to go around. The women inject embryonic feminism, as well as downright testy worker’s rights, but play second fiddle to the men. Too many causes, not enough screen time.

The production is anything but over-wrought. The costumes and sets are routine but well executed and the overall feeling takes the viewer promptly and energetically to 1840s-era England, France and Belgium. Bounced from pillar to post, Marx is forced to grapple with making a living while in the throes of changing the world. The older he gets, the more the doubts set in. As he slips into the fear that he has labeled as the hallmark of the bourgeoisie, the picture tells a compelling story of how near we came to losing his message then, and how near we are to losing it now.

Director Peck reunites with composer Alexei Aigui from “I Am Not Your Negro” to forge a tight-knit and high-class soundtrack. Art Director Merlin Ortner follows up this movie as AD for this year’s remake of Dario Argento’s classic splatter flick “Suspiria.”

Be there or be bourgeois.