In what might be described as brilliant advertising, this past Sunday’s Super Bowl teaser for “24: Live Another Day” really delivered. For the fans of the show, it gave them a taste of their hero —and heroine— back in action, and newcomers to the show got a taste of what they have been missing. 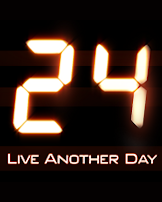 We finally got see some new footage of Jack Bauer (Kiefer Sutherland) in action with the new Super Bowl teaser, but the 49 seconds long teaser also brings up some interesting questions.

The change in scenery is a welcomed sight, with London now filling in as the city in peril, and what a siege it appears to be under. We can see fire, explosive accidents, screaming and flying bullets. I guess this is right at home for the gun-in-hand, bloodied forehead Jack Bauer, who is helping along a limping Chloe O’Brian (Mary Lynn Rajskub) in the middle of all the chaos.

Jack points his gun at a target just past our screens and begins to fire while screaming! What a magnificent way to resurrect the character who has been missing from our television screens for more than four years.

Executive Producer/Director Jon Cassar went online to Twitter and said this footage was filmed specifically for the Super Bowl teaser trailer, and not part of the actual filming he is doing for the season. So, does this mean the situation we saw in the teaser is made up? Or, will something similar occur in the actual show? Why does Chloe O’Brian look like “The Girl With the Dragon Tattoo”? Why is Jack back out of hiding?

Well, I can’t wait for answers to these questions, and I can’t wait to update you again with more exciting news for “24: Live Another Day.”