Ever get so disgusted with the government that you would like to branch out, so to speak, to your own uninhabited island? 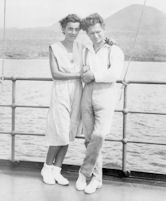 This is the way it was in 1929 for two Germans, Friedrich Ritter and Dore Strauch. They were totally disillusioned with society, calling it “a huge impersonal monster shackling its members.” They perceived their lives as meaningless under such governance, so they packed their bags and left their respective marriage partners, families and country and got on a boat. Four weeks later, they were in Ecuador, headed for an uninhabited Galapagos Island called Floreana.

Old black and white movies, letters and newspaper articles allow the filmmakers, Daniel Geller and Dayna Goldfine, to investigate this risky experiment. But as one of the island raconteurs in the film presciently warns, “Wherever you go, you bring yourself. If you are the problem, wherever you go you take those problems with you.”

Ritter and Strauch were intent on being their own masters in what they considered a paradise, an uninhabited island where they could be their own Robinson Crusoes. They believed that once freed of the influence of society, they would live like Adam and Even in paradise, experiencing complete peace and tranquility.

Ritter ingeniously created a shower and bath with running water. Dore domesticated wild animals. They cultivated a garden from seeds they brought from home, assuming they would remain vegetarians as a matter of principle. However, Dore, with a great German-accent voice-over by Cate Blanchett, is soon writing letters back home explaining that she needs “to be loved and treated kindly.” Ritter, it turns out, really can’t find anything good about anything, even in his garden of Eden, and ends up berating Dore as often as it suits him. In response, she tames a wild donkey who dances with her standing on its hind legs.

Robinson Crusoe meets vaudeville. As the saying goes, real life is stranger than fiction and that’s what happens on Floreana. A baroness with two lovers arrives with an idea for a luxury hotel, filmmakers come to create a pirate movie, a drought dries up the fresh water springs and five people die rather inexplicably.

Ritter, a physician, is portrayed as an arrogant, cynical misanthrope. So why would Dore leave everything to go off with a self-serving snob like Ritter in the first place? It turns out she had been recently diagnosed with MS. Ritter, a physician with an arrogance more akin to Nietzsche than his textbooks, told her she just had to develop mind power to overcome it. Amidst her first writings, she wrote that Ritter was her “teacher, guide and fate.” In other words, in the beginning, love is blind.

Five years and five mysterious murders later, only one of the islanders returns home. This film tells the story with gripping scientific objectivity and commentary from island locals well associated with the facts. What is learned about the case is what is also learned about humankind and our need for love, compassion and tolerance … as well as civilization.

This well-made, thoughtful and fully engrossing documentary is being screened on both Feb. 8 and 13 at the Portland International Film Festival. It will grip you from the moment it begins until the very end.

In prophetic understanding, the daughter of one of the original islanders says, “Paradise is not a place, it’s a condition.”