Review: I Am Yours (aka Jeg er din)

Norway’s entry for consideration for a 2014 Oscar didn’t make the final cut, and when you see it, you’ll know why.

A pretty single mother, Mina is starved for love and affection but has no idea how to get it. Soon enough, a man begins a flirtation on the street that ends up in her bedroom. It’s the Spider and the Fly story. The pretty little fly is so flattered by, and starved for, attention that she believes in the improbable pretense of the pretender and is fatally lured into his den of doom.

How closely the film reflects Norwegian character and culture is a mystery to this Norwegian-American, but its themes of sexuality, love, passion, and alienation are universal.

Mina, played tenderly with innocent angst by Amrita Acharia, is the archetype whose very biological drive tries to distract and blind her to her own potential as well as to what love is all about. Her sidewalk pick-up, Jesper, is played by Naomi Rapace’s ex-husband, Ola Rapace, who nails his portrayal of a self-involved writer whose greatest anathema would be responsibility (aka growing up).

Reflecting her inability to realize and appreciate who she is, Mina’s only career is showing up for casting calls. She interviews for parts, but never even gets an invitation to read. She is without purpose, caught up in a superficial world where she attracts people by her sweet looks rather than her firm sense of self or developed talent.

To complete this tragic tale of failure, Mina becomes estranged from her family and culture. She is a Pakistani who was sent back to Norway after an extended visit with relatives due to what she admits was a ridiculous situation – she had been found making out with her cousin.

Mina is the classic reject as well as a sexually frustrated woman with a passion and hunger for love and appreciation. The more she squirms against her situation, the more deeply she becomes entrenched in hopeless alienation. The world does not accept her and she cannot accept herself.

It’s not a neat and tidy, happy little film. Iram Haq, its beautiful Pakistani-Norwegian writer/director, reportedly writes from her own experience. The interplay of sexual desire, acceptance, love and the confusion of these very primal desires at the core of our human essence is brilliantly presented in an elevated, thoughtful production.

There are more questions than answers in “I Am Yours,” including the significance of the title. However, that’s the role of the important films that are shown out of the mainstream and what makes them the only ones to see. 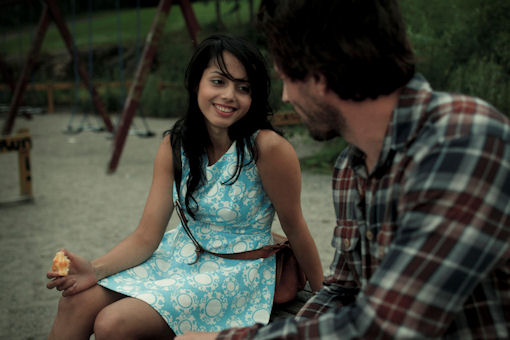 “I Am Yours” screens Feb. 12 and 20, 2014, as part of
the Portland International Film Festival and is
sponsored by the Scandinavian Heritage Foundation.