The 86th Oscar nominations have bravely, and rightly, fingered “The Wind Rises” as one of five works for Best Animated Film. At home in Japan, the film opened with overwhelming success and abrupt, surprising controversy. The same will happen here if it wins for best animation.

That’s why the Academy is brave. Brave, but right. There is no contest that “The Wind Rises” is one of the best animated films ever created. Written and directed by the world’s greatest anime artist, writer and director — often compared to both Disney and Spielberg — Hayao Miyazaki, at 73, has announced the end of his film work with this last paean to Japan, his parents, creativity and peace. It is a work of delicate love.

But the subject is going to be the problem for Oscar Academy voters. It’s the life story of the guy who created the Zero – known as the kamikaze plane that bombed Pearl Harbor.

How a tender story could come out the development of the Zero aircraft, nine of which were part of the Imperial Japanese fleet that flew without enough gas for a return trip, bombing Pearl Harbor in a surprise sunny Sunday morning, is a feat of Miyazaki’s sensitive genius.

While Miyazaki’s father was director of an airplane manufacturing plant that made the rudders for the Zero fighter planes during World War II, the innovative, inspired Zero developer, Jiro Horikoshi, is the biographic subject of this inspired film.

Warning, it takes at least 30 minutes to get hooked into this story. Don’t leave. When Horikoshi’s love interest, Tatsuo Hori, is introduced, the parallels and metaphors as well as literal story takes off. She suffers from tuberculosis, a sinister threat in crowded Japan. Like Horikoshi’s bride, Miyazaki’s own mother contracted a version of tuberculosis, spending 1947 through 1955 in a hospital and subsequent home recovery.

The intersection between Miyazaki’s life and his film’s story is poignant and perhaps adds explanation to why he is a famous, implacable Japanese pacifist. Though he has taken liberties with Horikoshi’s life story, the messages about creativity, inspiration and love of work and family still resonate.

“The Wind Rises” begins with Horikoshi’s childhood, defining him as a champion of the oppressed when he enters a fight, using his judo skills to prevent the bullying of a younger student. He also depicts Horikoshi as a dreamer, influenced by Italian aircraft manufacturer Giovanni Battista Caproni, who developed bombers for the western forces during World War I. Miyazaki’s Horikoshi is in love with the idea of flying and eventually carrying passengers, not bombs. However, ironically, Horikoshi becomes the creator of destruction to both Japan’s enemies and its own devoted young fighters.

Hailed as a feminist for his 1997 production of “Princess Mononoke,” and honored as an environmentalist and respected for his pacifism, Miyazaki implacably refused to attend the 2003 Academy Awards. At that time, his production of “Spirited Away” was nominated and won for best animation, but he refused to attend, explaining that he would not visit a country engaged in the pre-emptive war against Iraq.

Elevating Miyazaki’s animation to equal status with feature films, The Online Film Critic Society nominated “The Wind Rises” for this year’s Best Picture, Best Director, Best Adapted Screenplay, Best Film Not in the English Language as well as Best Animated Feature. While it didn’t win in the first categories, it won as Best Animation and deserves the same nod from the 2014 Oscars. 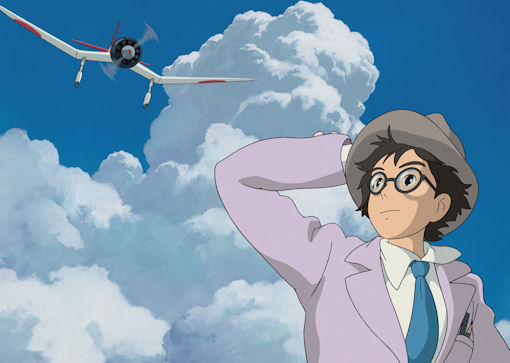 “The Wind Rises” has been chosen as the opening film for
the 37th Portland International Film Festival on Feb. 6, 2014.