A Music Video from The Host 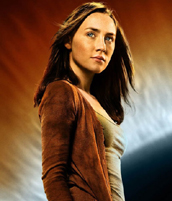 In theaters now, “The Host” is based on the novel by Stephenie Meyer (The Twilight Saga). Written and directed by Andrew Niccol, the movie stars Saoirse Ronan, Max Irons and Jake Abel (you can see two trailers from the movie HERE).

Plot: When an unseen enemy threatens mankind by taking over their bodies and erasing their memories, Melanie will risk everything to protect the people she cares most about, proving that love can conquer all in a dangerous new world.

Below, we have a music video for the song “Radioactive (The Dirty Tees Mix)” by Imagine Dragons, which appears on the film’s soundtrack.

“The Host” soundtrack – which was released March 26 by Metropolis Movie – includes the following songs: