Before Midnight: Trailer No. 1 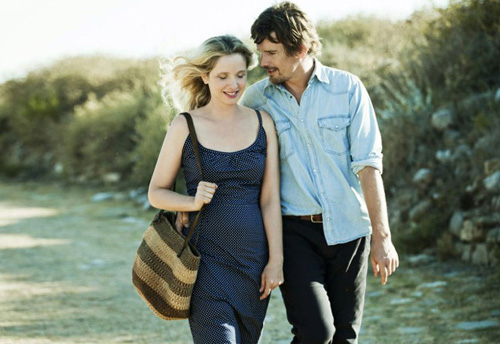 In terms of modern day romances, “Before Sunrise” and “Before Sunset”

— directed by Richard Linklater — hold very special places in hearts of many. The story started with “Before Sunrise” in 1995 when 20-something American Jesse (Ethan Hawke) first met Celine (Julie Delpy) by chance on a train and spent the night together in Vienna.

Nine years down the road, in “Before Sunset,” the two encounter each other in Paris, a little older and a bit wiser, but leaving us wanting more when Jesse misses his flight out of Paris as he sits in Celine’s apartment listening to Nina Simone watching her dance.

Linklater has reunited the two stars, now in their 40s, for “Before Midnight,” the third film in the series. Shot in Greece last summer in a most secretive fashion, it wasn’t until “Before Midnight” was already underway that it was announced. The film premiered at Sundance back in January to good reviews and Yahoo Movies has premiered the first trailer for the picture.

The film picks up with Jesse and Celine, now a married couple with twin girls living in Paris and vacationing together on a Greek island. As the trailer indicates, there may be some marital discord for our beloved pair. Eighteen years down the road, are Jesse and Celine as in love as they were when they first met? Or even the second time that they crossed paths? As in any marriage or relationship, insecurities may arise after years of being together and from the trailer, we see our couple going through each day reassuring each other that they would not change anything about their past.

As one of the scenes indicates, it’s all very romantic and leaves us to wonder whether the romance is still present in their relationship or, as Celine states, she feels as though she has been “stuck with an American teenager.”

Watch the trailer below and let us know what you think.

The hopeless romantic in me says that everything will turn out well for the couple and they will live on with their merry lives. The trailer pulls at the heart strings for me and hopefully “Before Midnight” will open in a theater nearby on May 24.