All we know about Game of Thrones season 7

After months of waiting, “Game of Thrones” is finally returning. Season 7 will premiere on Sunday, and with so much excitement surrounding the HBO show, we thought we’d take a look at everything we know about this upcoming season so far.

Can We Trust the Rumours? 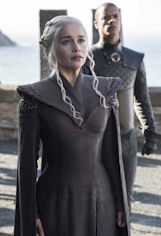 Due to the popularity of “Game of Thrones,” most media outlets, social media platforms and forums are packed with information and thought pieces on season 7 already. Most of these are fairly innocuous, like iNews delving into the real-world inspiration for the show and costume designer interviews.

Even large brands and companies are publishing articles on the award-winning show. Online poker operator 888poker recently published a post detailing which characters would excel at poker, giving fans an interesting insight into who may be successful throughout season 7. For instance, Daenerys would apparently be great on the international circuit as she has the ability to speak a variety of languages, as well as the charm and heart to gather allies. As poker requires strategy, like we’re sure the Great War will, we’re putting our money on the Mother of Dragons after this.

Still, while these sorts of articles are very interesting, there are some rumours and even spoilers that have popped up all over the web in recent months. Reddit is usually the source of these rumours, as individuals with insider access to the show are often posting bits of information.

For example, someone with apparent access to early issues of Empire magazine posted an excerpt containing Jon Snow’s real name. Reddit was also the source of a supposed leak as one Redditor posted the entire plot behind season 7, complete with specific details that have since been backed up by set photos. We don’t know who this individual is or if they’re trustworthy, but you can read about it here if you so wish.

Why is This Season So Late & So Short?

As we’re sure fans of the show know, “Game of Thrones” usually begins in April each and every year. However, season 7 does not begin until later this month and the reason why lies in the name of the series: “Winter Is Here.” As David Benioff and D.B. Weiss explained to Digital Spy last year: “We’re starting a bit later because at the end of this season, ‘Winter is here,’ and that means that sunny weather doesn’t really serve our purposes anymore.”

This season will also be significantly shorter than its predecessors, with just seven episodes in its roster. Apparently, this is because while HBO may want to continue the series for as long as possible, the producers want to avoid oversaturating the market.

Don’t get disheartened though, as the season 7 finale will actually be the longest episode in history, with a runtime of 81 minutes. In fact, there are three episodes that are longer than usual, which means the running time actually fits with that of previous seasons.

Who Will Be Returning?

According to their contracts, Emilia Clarke, Kit Harington, Nikolaj Coster-Waldua, Peter Dinklage and Lena Headey are all expected to appear in season 7. In addition to this, Joe Dempsie and Iain Glen have been spotted at filming locations, so we should expect to see them, though we hope it’s not in flashbacks.

There you have it: everything we know to be solid fact about the upcoming season of Game of Thrones. There are plenty of other bits and pieces of information, but we simply won’t know if they hold water after the show premieres.