There are love stories set in wartime, and there are war stories with love affairs. It is a rare film that succeeds in combining a nail-biting spy story with one of redemption through self-sacrifice. This movie does it by combining an ambivalent German SS captain with a dedicated Jewish spy. The stakes could not be higher. Horrendous death awaits either one at the slightest misstep. As their situation becomes ever more desperate, they have only each other. 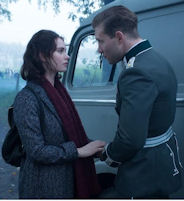 Decorated SS Captain Stefan Brandt (Jai Courtney) is back from the horrors of the Polish front and recovering from an Allied souvenir of shrapnel in the abdomen. That has not slowed his love life as he is entertaining a beautiful woman of aristocratic bearing. When she leaves, he asks if he will see her again. Not likely. He is leaving on a special mission to head the security detail guarding exiled German monarch Kaiser Wilhelm II (Christopher Plummer).

Disgraced in his native Germany, the Kaiser lives in exile in the Netherlands. Since fleeing there during WWI, his life is a nostalgic and narcissistic netherworld where the Prussian monarchy reigns eternal. At the outset of WWII, Hitler soon controlled Holland and inherited, among other things, the Kaiser. As the Fuhrer wrapped Germany in a brainwashed assault on the world, the Kaiser was a dangerous artifact. A possible lightning rod for anti-Nazi resistance, he was tolerated, incommunicado and under house arrest, while Germany decided if he could be of any use. Captain Brandt’s mission is to keep Wilhelm safe, silent and stationery. Above all, he is to make sure he does not accept Britain’s offer of asylum, carried by an assortment of spies.

Brandt’s sexually takes over and he falls for Mieke (Lily James), one of the Kaiser’s maids. As expected, her duties in the Kaiser’s house involve more than dusting the crockery. She is governed by the Kaiser’s second wife, Princess Hermine Reuss (Janet McTeer) whose main job is preserving the Kaiser’s fantasy world of imperial monarchy while begging him to be polite to the Nazis. This ensemble of aging royalty, soldiers of mixed loyalty and outright spies makes for a fertile stew of intrigue. The lethal war outside is contrasted to the Kaiser’s daily royal proclamations and the slavering Nazi SS credo is contrasted to Captain Brandt’s overriding desire for a good lay.

Regarding Brandt’s fighting and shrapnel wound in Poland…. Mieke: “What is the medal?” Brandt, “The Iron Cross Second Class.” Mieke: “How did you get it?” Brandt, “By surviving…in a second-class way.”

Good work by new director David Leveaux combined with perfect sets and costumes and great performances by Courtney’s and James make this a beautiful nail-biting love story. As in all great films, the supporting performances make the movie. Two time BIFA award-winner Eddie Marsan’s Heinrich Himmler is the best characterization of pure evil since “The Exorcist.” Oscar nominated Janet McTeer’s Princess Hermine walks the fine line between loving loyalty and utter kookery with precision and finesse. 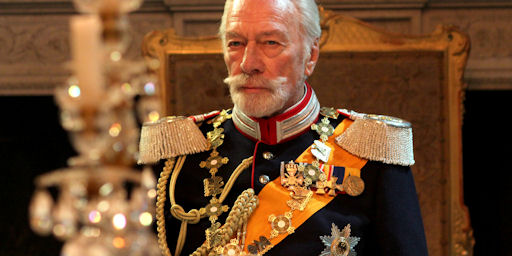