I’m becoming more interested not only in the content of a documentary, but in investigating its truth. This is why I interviewed a Sovietologist and retired CIA operations officer in the clandestine service of the CIA’s covert action section about Oliver Stone’s most recent controversial documentary, “Ukraine on Fire,” which has been banned in Ukraine. 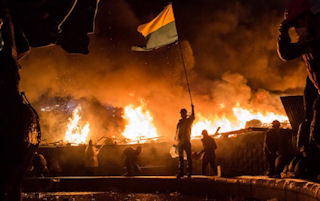 Stone, a filmmaker of some of the most profoundly thought-provoking films like “Platoon” (1986) and “Born on the Fourth of July” (1989), dared to make “Snowden” (2016), which gave us the riveting story of the whistle-blower who revealed covert US surveillance undermining the US Constitution. While often praised, Stone has also been condemned for being unpatriotic, to say the least, and “Ukraine on Fire” may be his bravest exposé yet.

Current, painstakingly documented and alarming, Stone’s most recent film, featuring Vladimir Putin and John McCain, significantly deviates from the media story of the Ukrainian uprising of 2014-15 by revealing a covert western intervention.

However, the story the world heard was just the opposite. The story we heard was that Russia was responsible for the takeover of Crimea and intervened in the Ukrainian effort for self-determination.

Headlines asserted “The annexation of Crimea was the smoothest invasion of modern times” (BBC, March 2014), and “Have We Forgotten the Invasion of Ukraine and the Occupation of Crimea?” (Newsweek, 10/2015).  This year CNN reported: “White House Press Secretary Sean Spicer reported that Trump expected Moscow to withdraw from the region, which it occupied following a ‘full-scale invasion’ in 2014.”

In “Ukraine on Fire,” Stone argues that Russia neither invaded nor interfered in Ukraine’s coup d’état.  Instead, the film reveals that it was a home-grown extremist operation allied with militant partisans from the west. Stone discloses that there was no Russian invasion of Crimea. In a democratic vote with 90% voting, citizens in Crimea voted 96.7 percent in favor of annexation. Historically, Crimea had been part of Russia until Khrushchev gave it to Ukraine in 1954. They simply voted for reunification.

Who is telling the truth and why does it even matter? In searching for some way out of the confusion, which seems to be much more widespread than just the reporting on the Ukrainian crisis, IJM interviewed Nicholas Alexander, an eye-witness and agency operative, who reveals surprising and worrisome information.

It’s Just Movies: One of my interests in writing about Oliver Stone’s new film, “Ukraine on Fire,” is to get to the bottom of fake news and real news.

Nicholas Alexander: I have the highest regard for Oliver Stone and all that he does.  His story on Ukraine is indisputable and his film is correct.  The western media has lied. Despite borderline legal problems in the telling, I was there, saw everything and want people to know.

I was in an apartment above the Maidan, the parliamentary section of Kiev, the capitol of Ukraine. There was a peaceful protest going on regarding a delay in Ukraine’s entry into the EU. Ukrainians had been protesting for days in 20-degree weather.

One day I saw snipers on the top of a building to the right of where I was staying. They were shooting at the unarmed police below who were monitoring the demonstration.

My belief is that the snipers were supported by the US government through logistical support like food and propaganda leaflets. Essentially, they assisted in killing the people in the Ukraine. I am not exaggerating. I believe they were supported by unnamed elements in our government.

IJM: What is your evidence for this assertion?

NA: When I was coming into Kiev from Zakarpattia, a western Ukrainian region bordering Hungary, on an overnight train during the Maidan resistance, my guide and I found it strange that the normal presence of Ukrainian police was absent. Nobody checked anyone at the train station, which was surprising since the nation was in crisis. However, the station and train were filled with men in fatigues, not army or police uniforms. They seemed a very disciplined group of partisans from the west, following orders coming from somewhere outside the Ukraine.

My guide and I were in separate bunks. A partisan was on top of mine. He had to go to the toilet. On his way, he dropped his wallet. I grabbed it and in there was an ID card for the Right Sector. I looked through his wallet and quickly closed it. All his documents were fresh and seemed to indicate that they were printed in the west.

IJM: In the film, the Right Sector is identified as having roots in the ideas of Bandera, one of the most ruthless Nazi collaborators who should have been prosecuted at Nuremberg.

NA: That is correct. The film’s top-secret WWII info on Bandera is true. Compared to the other Nazis, Bandera was the worst. *

His organization committed more gruesome atrocities than the Nazis, if you can believe it. The Germans didn’t have the stomach to do what Bandera and his crew were doing.

After the war, the US gave Bandera sanctuary because we wanted his help in gaining access to the Ukraine. We were never against the Soviet Union. Russia was always viewed as the real enemy. Ukraine has incredible untapped mineral wealth, including uranium, coal, oil, rare metals, emeralds, and rubies.

The Right Sector is made up of extremists who want an anti-Russian, independent Ukraine. They are composed of right-wing nationalists who are very dangerous. The partisans wore Bandera armbands and some wore distorted, modernized Nazi swastikas.

IJM: Was the original Ukrainian protest really over Ukrainian President Yanukovich’s decision to postpone Ukraine’s entry into the EU?

NA: It was used as a vehicle for the partisan protest. It was worked out many years in advance, beginning with Bandera, in a US collaboration planning for the separation of Ukraine from Russia. Ukraine is a strategic interest and a stepping stone in America’s plan to break up Russia and take over its rich mineral resources. Ukraine is strategically vital to the west. The next step is Siberia.

IJM: In the news, the entire event was described as a Russian invasion into Ukraine and usurpation of Crimea contrary to Stone’s version.  Is the US media lying?

NA: The State Department gives the media info on what they want them to report. There is collusion between CNN and the State Dept. They are in concert. I have no reservations about telling this truth. They are following a script devised by the neo-cons and the corporate news media.

When I worked in Moscow it was bizarre. Guys in the state department at the embassy would go get coffee in the lounge where everyone was watching CNN to get their information and write their daily reports.

There is a symbiotic relationship between the two. CNN gets its stories from the State Dept. and vice versa. Corrupt.

IJM: Why would the US and/or western media be interested in demonizing Putin and the Russian Federation?

NA: Ratings go up. Fake news. There is no collusion between Trump and Putin.

Also, the western press thrives on access. If a reporter loses access to the State Dept. his/her worth decreases. A reporter’s name is only as good as his/her access. I’m talking about the Deep State and it is out to get Oliver Stone.

[“The concept of a deep state suggests that there exists a coordinated effort by career government employees and others to influence state policy without regard for democratically elected leadership” (Wikipedia)].

I have researched Alexander’s claims and support of Stone’s documentary and found them verifiable. If anything, “Ukraine On Fire” could have a sequel further elaborating on the Right Sector and the Deep State and their influence on western action. 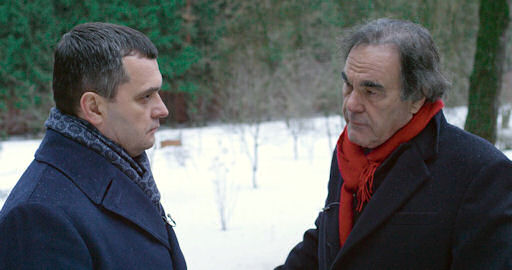 “Ukraine on Fire” is banned in Ukraine, so Stone is streaming it online for $3.99 at http://www.ukraineonfire.com/. IJM would like to read your reaction to it at https://www.facebook.com/itsjustmovies.


* FYI from Nicholas Alexander: I am including this footnote because I want to make clear the dangerous nature of the Right Sector and their inspiration, Stepan Bandara. If this had happened in the US or present-day Israel, we would never hear the end of it.

“In May 1941 at a meeting in Kraków the leadership of Bandera’s OUN faction adopted the program “Struggle and action for OUN during the war” which outlined the plans for activities at the onset of the Nazi invasion of the Soviet Union and the western territories of the Ukrainian SSR. Section G of that document –”Directives for organizing the life of the state during the first days” activity of the Bandera followers during summer 1941. In the subsection of “Minority Policy” the OUN-B ordered the removal of hostile Poles, Jews, and Russians via deportation and the destruction of their respective intelligentsias, stating further that the “so-called Polish peasants must be assimilated” and to “destroy their leaders.

“In late 1942, when Bandera was in a German concentration camp, his organization, the Organization of Ukrainian Nationalists (OUN), was involved in a campaign of ethnic cleansing of Volhynia during the Ukrainian-Polish civil war, and in early 1944, these campaigns began to include Eastern Galicia. It is estimated that more than 35,000 and up to 60,000 Poles, mostly women and children along with unarmed men, were killed during the spring and summer campaign of 1943 in Volhynia” [Wikipedia].