Fluffy and light hearted, as the final credits roll, political aficionados will wonder what it was they just saw. As it turns out, that is what this movie is all about. It is glossy, splashy and at times rib-ticklingly funny, but there is a lack of even the most basic facts. No coincidence. This is not a political documentary. It is the story of the dawning of the Presidency as prime time TV. 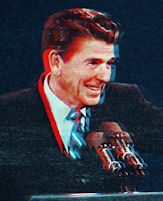 Indeed, much of the archival footage that makes up this rollicking trip to the West Wing is set in the rounded corners TV format that we grew up with. “Leave it to Beaver” has gone inside the beltway. The Father who Knows Best has been promoted to the leader of the free world. Just as middle-aged TV gave us simple solutions to the most complex problems, our 40th president, coiffed and richly suited, reassured us that if the rich were happy, the rest would take care of itself. If you do not believe it, take as aspirin and call me in the morning.

As he jokingly summed up the Republican mantra, the most terrifying words in the English language are, “I’m from the government and I’m here to help.” He offered little help. He did provide the most convincing image of someone who knew what he was saying. When he did not, Nancy was hovering in the background, popping from off-camera with a birthday cake to lighten up a potentially sour moment about nuclear holocaust. Behind every successful man’s persona is a woman who dodges more than her share of the mines.

With his finger on the Star Wars button, Reagan trades jabs with Soviet leader Mikhail Gorbachev, jostling for the title of Hunger Games Communicator-in-Chief. As football morphs into a made-for-TV athletic competition, the oval office ushers in more equipment than a Hollywood sound stage. It is all there, the successes, the failures, the hilarious out takes and the final farewell. Even as the last walk out the door and down the garden promenade threatens to overrun the allotted time, the confident smile and reassuring wave tells us it will be all right. We wait, expecting the actor to run into a wall and execute a Charlie Chaplin pratfall. All we get is one term wonder George H.W. Bush. He could not fill the screen that Reagan left behind.

It is no coincidence that this flick is coming out now, in the wake of the democrats pulling failure out of the fire. Donald Trump is an actor, but he is nothing compared to The Gipper. At least when Star Wars was universally decried and the worst idea since mustard gas, the Ronald/Nancy team has the good sense to see the writing on the wall. Or the message in the tea leaves. It remains to be seen if the Don will be able to do the same.

The threats now are the same as then and statesmanship as prime time will work no better now than then. As the new president learns the ropes we hope that, like the doctors, first he does no harm. 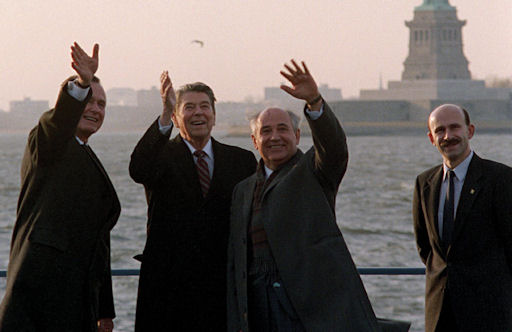