All Wifed Out: First Trailer 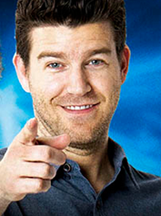 When a movie starring Marc Maron, Metta World Peace, Dustin “Screech” Diamond and Eve came to my attention, my first thought, of course, was WTF? (pun intended). How can there be a movie that includes these four personalities, and yet I have never heard of it?

I checked out the trailer expecting the worst and somehow I was disappointed. The three actors (?) listed above seem to be peripheral characters (or maybe they just have cameos) in what looks to be a sub-standard “Hangover” rip-off. And after the two “Hangover” sequels, who needs more of those, right?

The two leads in this movie actually appear to be Scott Rodgers and Fat Jew (aka Fabrizio Goldstein) of the Upright Citizens Brigade. Yes, his name, as you will see in the credits, is “Fat Jew.” In any event, the acting here is pretty terrible and there are no laughs to be had.

The film’s description is as follows: “After his girlfriend asks him to move in with her, a guy’s two best friends plan an epic night out in New York City to help him decide if he wants to stay in his relationship or not.” After reading that, I immediately wondered what the title even means. If a guy was partying with his friends because he was sick of his wife, it might make sense. But that description plainly says they aren’t even married – or thinking about getting married.

Regardless, check out the trailer to see whether this night out is worth your time.

“All Wifed Out” is due in theaters and on demand Nov. 15.