It is very hard to make original movies these days, so Hollywood tends to re-make, create sequels or spin-off from past popular films.

The original 1976 version of “Carrie” was based on the 1974 Stephen King Novel, a story about an out-cast teenage girl named Carrie White who uses her telekinetic powers to exact revenge on her peers. In my opinion, “Carrie” was a perfect adaptation of the novel and I felt going in that the 2013 version was unnecessary. If you are going to do a horror re-make, it needs to be bigger and not just bloodier. I watched the original twice, once before the 2013 screening and once again right after the screening.

In the 1976 version, Sue had a more involved role than in the 2013 counterpart, where most of the hazing was done by Chris. Carrie getting her “monthly visitor” in the original was portrayed well in my opinion, because Carrie was victimized more with tampons and pads while in the 2013 version most of the damage was done by a videotape. Obviously, the first film was limited by the technology at the time but Carrie had a more direct effect of the hazing, because with the video I doubt that she would have had the same results because Carrie does not seem like one to have a social media site.

The 2013 version did several things that bugged me in the events leading up to the prom and one was the constant referral to her as “Carrie White” rather than Carrie. Carrie was the only character referred to by her first and last name and I did not see the significance of that. This film also changed the character of Chris in a way that seemed like a poor representation of young women and it seems like they put too much focus on her character in this film than the original.

The 2013 version does keep its promise, however, in keeping mainly to the events in the book much like the original.

The Prom and The Aftermath
The Prom was played out very well in both movies, as this is the moment that makes Carrie. One thing director Katherine Peirce does for certain in this film is give us a lot of blood. In addition, it is very clear how much movies have changed as the 2013 version has stunning visual effects and they are more creative with Carrie’s telekinesis ability.

Relationship with Margaret White
Another important factor for “Carrie” is the dynamic relationship between Carrie and her mother. This unstable relationship is portrayed perfectly in the re-make by Chloë Grace Moretz and Julianne Moore. The filmmakers could have used all the new technology to make the final scene between Carrie and Margaret more than what it was, though. Ultimately, Brian De Palma (who helmed the original) and Peirce both did great jobs in directing the scenes between the mother and the daughter because in both films you can feel chills every time Margaret rattles off her religious beliefs.

Acting
In both films, the acting is superb by both the actresses playing Carrie (Sissy Spacek, Chloë Grace Moretz) and Margaret (Piper Laurie, Julianne Moore). One thing that Pierce did differently in her film is to cast younger actors for the high school roles, which made the film more relatable.

My Verdict
Overall, this film proves to have little new to offer fans of the original. Although Julianne Moore stole the show, her performance is not enough of a reason to see this film as the original Margaret also did a fantastic job. Additionally, setting this film in the age of social media hurts the film because it is very unlikely that Carrie would be a victim of online bullying. 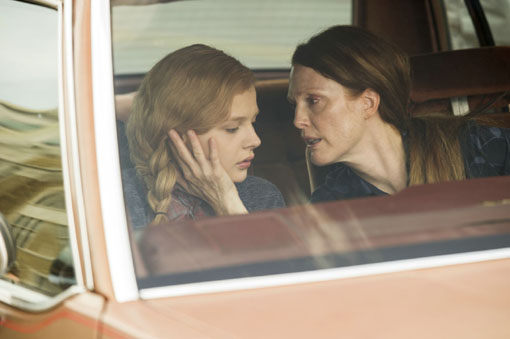 “Carrie” is in theaters now, but I would save your money and watch the original “Carrie” instead. It tells the same exact story, but it does a better job.