Nominated for the Golden Bear, the top award at the Berlin Film Festival, Bruno Dumont has added another bitter pill to his weighty list of accomplishments with “Camille Claudel 1915.” He has either won or been nominated for most of the top European film awards. The one major nomination missing is the American Oscar, but one does not feel he misses it. If he were ever called on stage to accept it, he would probably just as soon pummel himself to death with the icon as display it in his house.

This film is a tragic story of epic proportions, enacted with surgical perfection by Juliette Binoche and Jean-Luc Vincent. In many heart rending films, there is a saving grace at the end, some hope for the future. In this film, the writer/director gives us almost none. The only hope is what we make for ourselves. Make no mistake, Dumont is a cinematic genius. He has been compared to Michael Haneke, another genius. Unfortunately, they both use the screen to challenge the viewer to find anything good in mankind.

Camille is a bio-pic about the sculptor Camille Claudelle (1864 – 1943). She was a protégé’ and lover of Auguste Rodin, although he refused to leave the love of his life Rose Beuret for her. Camille aggressively lived and defended the Bohemian lifestyle and for this she paid a price.

Although she produced beautiful works of art that are revered to this day, she was prone to fits of mental instability that were aggravated, in the eye of proper society, by her socially eccentric affinities. Even worse, in the eyes of her family, she violated the dogmatic fundamentalist faith of her devout Catholic brother Paul, who seriously considered becoming a Benedictine monk, and her mother, whose father was a priest.

Her outrageous behavior would not have helped Paul’s rise to France’s top diplomatic ranks, nor would it have reflected well on France if that behavior had become known in the top government circles of the international powers in which he served. She thoroughly trampled on the social/religious dogma of her mother, having an illegitimate pregnancy terminated. There could be no worse sin or slight in her mother’s eyes. Paul is depicted in this film as sensitive to Camille’s misery but helpless to change it. She had committed one sin too many. She needed to atone. 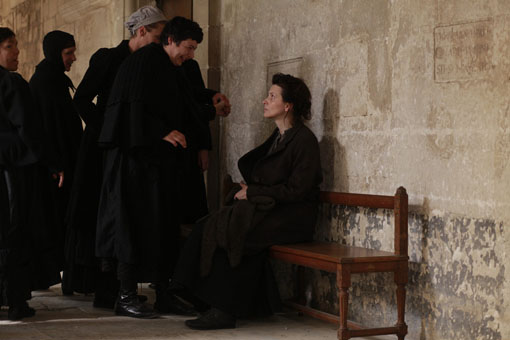 Only her father, a businessman, was able to accept her lifestyle in the spirit of laissez-faire. When he died in 1913, Camille’s brother apparently had her illegally admitted to a secure psychiatric hospital, claiming she had agreed. She spent the rest of her life there, dying thirty years later in 1943, having hardly a single visit from friends or family. However mentality unstable she was on admission, this film depicts her as striving valiantly to maintain her composure in the first years of her stay in the hospital.

This film depicts Camille’s life in 1915, two years after being imprisoned in the asylum and two years before Rodin married Beuret in 1917 (they both died in that same year). She is slowly being driven insane by her life of desolate isolation and her forced companionship with the deranged. Director Bruno Dumont chose to use real disabled asylum patients in this film, rather than actors. This controversial decision adds an element of horrific realism that makes it all the harder to watch.

Camille lives for only one thing, a visit from her brother, the only person who has the legal right to visit her. Her brother visits and we see the tragedy of their lives unfolding before us.

Jean-Luc Vincent plays Paul Claudel to Juliette Binoche’s Camille. The power of the story lies in its ability to tell the story of her life, and that of her brother, encapsulated in that single meeting. In the minutes they are together, we are shown them crushed under the tidal waves of social and political power that have come down upon them. Jean-Luc Vincent expresses the overwhelming confusion and regret of a man who is truly coming face-to-face with his fervent beliefs for the first time. He is forced to choose between the demands of his mother, his profession and his religion, and the liberty of his sister.

This choice is driving him insane just as surely as asylum life is driving Camille insane. As Juliette Binoche enacts the terror and despair of Camille the viewer cannot help but understand that her commitment was one of the most grievous judicial misdeeds in modern history.

So perhaps the film is a cautionary tale, or perhaps it is a story of the inevitable fate of the truly talented. In either case, there is little in this film is the way of hope, healing or moving on. 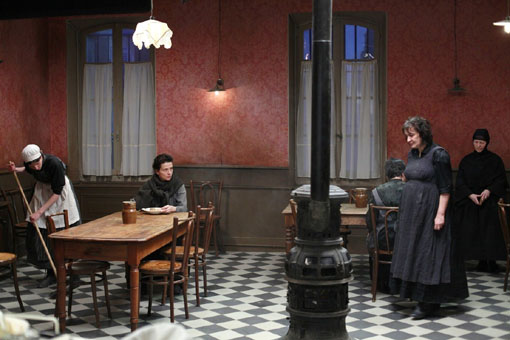