The second trailer for David O. Russell’s “American Hustle” is here and it looks phenomenal, giving us much more narrative and plot points than the first trailer did. 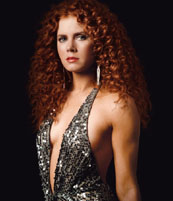 This is a film that can pretty much combines the casts of “The Fighter” and “Silver Linings Playbook,” and adds even more star power. The biggest problems with having such a large and talented cast of actors is whether or not they will be given enough screen-time to justify them being in the film and whether the story will suffer from the distractingly large amount of A list stars needing to be featured.

One thing is for sure, though, the visual fluency and trademark style of David O. Russell are present and if his last few films are any indication, then I believe that “American Hustle” will be a hit.

It’s the ‘70s and “American Hustle” is a dramatic story of fiction that involves a con man named Irving Rosenfeld (Christian Bale) and his equally Machiavellian partner and lover, Sydney Prosser (Amy Adams). They are entrapped by FBI Agent Richie DiMaso (Bradley Cooper) and forced into the dangerous world of Jersey power brokers and mafia kingpins.

Carmine Polito (Jeremy Renner) – the mayor of Camden, New Jersey — gets caught between the con artists and the FBI and his much younger and erratic tempered wife Rosalyn (Jennifer Lawrence) could be the one to pull the plug on the entire endeavor to expose them all.

I loved this feature trailer for “American Hustle,” which is rich with ’70s style from the clothes to the hair and the feel of the film with the look of how the film was shot. I think that this second trailer has helped pique my interest in the film, showing us just enough about each character to make them appealing.

While there still is a bit of mystery in the story, we get to see just enough to get the feel of the film. I personally love the type of humor David O. Russell imbues into his movies.

The fact that there are so many genre stars in the movie will help bring in enthusiasts from all of the franchises represented in the cast. Christian Bale was Batman in the Christopher Nolan “Dark Knight” trilogy, Jennifer Lawrence is Katniss Everdeen in “The Hunger Games” as well as Mystique in “X-Men: First Class,” Jeremy Renner plays Hawkeye in “The Avengers” and Amy Adams was Lois Lane in this year’s “Man of Steel.”

Like David O. Russell’s previous films, “American Hustle” seems to defy one particular genre while focusing on the relationships with lots of raw emotions and life-or-death stakes.

What are your thoughts on this trailer and the film in general Do you think all of this star power will boost this movie to box office and awards gold or will it be a stumbling stone in trying to make sure everyone gets their time to shine? Leave your comments and let us know.

“American Hustle” is not yet rated and has a limited release scheduled for Dec. 13, with a wide release set for Christmas Day.