Review: Tall as the Baobab Tree

After a son falls from the village baobab tree and breaks his leg, there is no money for the necessary medical care – unless dad sells a daughter off for marriage.

This re-enactment film is based on a true story, acted out by local rural Senegalese villagers and shot on location by inspired director, Jeremy Teicher.

“Tall as the Baobab Tree” is the sixth film in the Voices in Action: Human Rights on Film series being shown at Portland Oregon’s Northwest Film Center. There are no more informative, poignant, revolutionary films being shown on the face of the planet. Some in this outstanding series are also part of the international Human Rights Watch Film Festival which selects films on their ability to influence public opinion and governments world-wide.

My wise 87-year old writing partner sees this particular film in the NWFilm Center series as representing one of the important moral predicaments of our time.

Anderson: I am seeing this whole cultural theme in the movie as people surrounded by a great wall. For centuries people in traditional cultures have gone about their lives safe in the rules that govern their part of the world. Everyone knows their place. Some are happy, healthy, and lead good lives. Others – not so much. But, all along tiny holes are being punched into that wall. Changes are being made. Old ways are leaking out and new ways are crowding in. When the dam bursts there is no way to stop it.

Questad: This conflict between tradition and human rights is typified in this film by its lead character, Coumba, played with self-confident dignity by Diar Ka. She is a tattooed young woman who has just passed her academic tests in the big city. She can now advance to the next level in her schooling. However, when she hears that her younger sister will be sold off in marriage so that her brother can get medical care to fix his broken leg, she devises a secret plan to earn money instead. We’re wondering why the whole family doesn’t see her solution as the most logical action in the first place.

Anderson: Bev, it is only fair to look at the community from their point of view. They are trying to live their lives by age-old rules. They love their family. The mother understands the old ways and believes in them. I think the father is just acting as he was trained to act in his culture. He is doing what he thinks is right. These things have been going on in his culture for hundreds of years and change comes slowly. To put this in closer perspective to our American culture, my father was born in l877 and my mother in l89l and they certainly had adjustments to make to life in the 20th century. I also had to live with parents who, according to me, just did not understand the world I was living in. 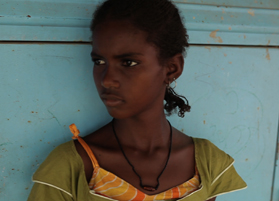 Questad: Okay, maybe I understand. You came from a very strict upbringing. You did not agree with your parents’ adherence to rigid customs. Coumba’s mother represents this importance of tradition when she tells Coumba, “Don’t you see, all we have is our culture. Don’t change your culture. Understand your culture.” But Coumba ignores her mother, just like you did when you left the austere community of your parents and moved out on your own to a big city. It’s not whether anyone is right or wrong in how they want to live, it’s that one way supports community values and the other individualism and self-determination. Have I got it?

Anderson: I think so. Like my parents, the Senegalese mother and the villagers are comfortable with their traditions based on order, predictability and survival. It’s just that Coumba, like me back in 1948, has seen a different possibility and this means she may have to break with her village.

Questad: Except that maybe her village will change. Remember the sequence where Coumba goes to school to get advice from her teacher? He tells her to report her parents to the police for setting up the sale of their younger daughter.

Anderson: That shows that the community has a reason to mistrust the schools who want to take away the rights of the father to raise his family as he sees fit. Wars are fought to stop change and keep the power.

Anderson: This is an age-old question. We do know we cannot stop change. However, the question in this film seems to be how far we should go to bring about that change. It’s one thing for people within their own culture to judge, modify and revise their customs. But from the outside, is interference in other cultures morally right? On the other hand, is standing aside and allowing abuses and injustice ever ethical?

Both Ardelle and I recommend seeing all of the Voices in Action films. We agree that, in Dylan’s words, “The times they are a-changin’” and that education through awareness of the conflicts and problems in the world is our first responsibility as world citizens.

Proceeds from the movie screenings will go directly to the village school where the movie was filmed and to non-profit organizations working with Girls Not Brides.