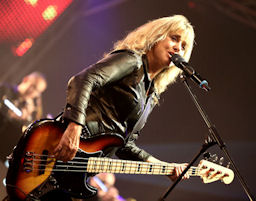 Suzi Quatro was and continues to be a trailblazer. Her voice is as unique as is her style, no-nonsense attitude and how she pursued her career on her own terms. “Suzi Q” is a compelling documentary by director Liam Firmager that includes a slew of great interviews, vintage footage and an introspective look at a rocker who clearly deserves to be in the Rock ‘n Roll Hall of Fame, but inexplicably has been overlooked.

Some of Quatro’s hits include “Can The Can,” “48 Crash,” “Daytona Demon” and “Stumblin’ In.” She achieved superstar status overseas, but the native of Detroit flew a little more under the radar in the U.S. Any music historian or true fan loves this lady of rock.

Quatro was intrigued that “Suzi Q” director Liam Firmager wanted to do a documentary on her, despite the fact that Firmager didn’t necessarily consider himself “a fan.” “I asked, ‘Why do you want to make the film?’ And he said, ‘Because I saw you on television on a talk show and I found you fascinating.’”

“Now if I’m going to make a film,” Quatro continues, “I don’t want some guy kissing my a**. I want an objective good filmmaker who sees me, warts and all.” She had ground rules, too. “I stuck to them religiously. I said, ‘I have editing rights because it’s my story. But I will not exercise my editing rights even if I’m uncomfortable with what’s being said, if it’s the truth and it serves its purpose in the film.’” To Quatro those moments were her favorite.

When she was a youngster growing up in Detroit, Quatro caught a glimpse of greatness when she saw Elvis Presley on TV and declared, “That’s what I’m going to do!” Quatro’s path was set and she did not deviate from it. “Suzi Q” does an exceptional job of following Quatro’s early years of honing her skills as a guitarist, then as a bassist as she came up through the ranks of some all-girl bands that included her sisters at various points, and that were met with initial success. The documentary follows along as Quatro gained popularity and then was ultimately singled out to embark on her own solo career, separating her from bandmembers, sisters and her family, and depositing her overseas where she found incredible stardom.

“Suzi Q” features interviews with the rocker herself, goth/shock rocker Alice Cooper, Deborah Harry and Clem Burke of Blondie, Joan Jett, Cherie Currie of The Runaways, Tina Weymouth and Chris Frantz of Talking Heads, Donita Sparks of L7, actor and producer Henry Winkler of “Happy Days,” Kathy Valentine of The Go-Go’s, KT Tunstall, members of the Quatro family and many others. I won’t give anything away where the interviews are concerned, as the viewer simply needs to listen to and appreciate those individuals who impart the gravity and importance that Suzi Quatro has had on female rockers and music history. Of note, the Joan Jett interview is particularly compelling and gives the viewer the impression that Jett perhaps enjoyed the commercial success in the U.S. that Quatro could have or should have had. Yet, Quatro directly inspired Jett and all female rockers that emerged during the 70s and 80s.

Quatro was aware of many of the people that were going to be interviewed for the documentary, but some, like the Weymouth and Frantz were more of a surprise. “The comments … When you see it on the big screen, it’s just humbling,” Quatro explains of the film’s sold out premier in London. Watching the finished film was a thrill and definitely emotional. “I cried like a baby,” she adds. She also admits that she snuck in to see the film because she wanted to see and feel what the audience was reacting to on screen as the movie was playing.

Throughout various points in the film, Quatro is hand-writing poems out on sheets of paper. “I am very much a poetry-lyric conscious person,” she says. “I always have been. I’m very good with words, I’m told.” When making the film, Quatro worked with Firmager and read out certain passages that were cleverly intertwined throughout the film and give it even more depth.

Although she was born and raised in Detroit, Quatro has lived in the U.K., but remains a Detroit girl through-and-through. “I left such a big chunk of myself there,” says Quatro. “I think because I left so young, it made me really hang on to my memories. Although I’ve been gone since 1971, I am Detroit.”

For those in the United States, many people remember Quatro as having a stint as recurring character Leather Tuscadero on “Happy Days.” She donned her signature leather catsuit and would rock Arnold’s Drive-In, even performing several Elvis tunes. It was clear that she was the only true musician on Arnold’s stage, but in performing essentially as herself, she ingratiated herself to a whole new demographic and fans here in the U.S. She was talented, cool and approachably edgy in a way that viewers simply hadn’t seen before. She was portraying a character that essentially was Suzi Quatro. “It got it into the public psyche and it broke the mold,” says Quatro. “You could see it was for real and that I was a musician.”

She appeared on “Happy Days” during three seasons during 1977-1979. Although she was offered her own spin-off series, she declined because she wanted to branch out elsewhere. She went on to star in theater, including in “Annie Get Your Gun,” and “Tallulah Who?” and in several other television shows. “I love acting and I love all the arts,” Quatro explains. “I am an artiste. I refuse to be boxed. Rock and roll is my main part where I fit comfortably, but I love acting, I love writing, I love poetry, I love my radio shows, I love everything that is in the ball of wax called entertainment. This is what I am – a communicator, an entertainer, and creative. Those are the three words I would use to describe me.”

“I’m doing a movie about my life next, because of the reaction to this documentary,” finishes Quatro, and she is currently assisting with work on a script. She shares the names of some talents that she feels might portray the role to its fullest, among them, Miley Cyrus, Billie Eilish and Paloma Faith. 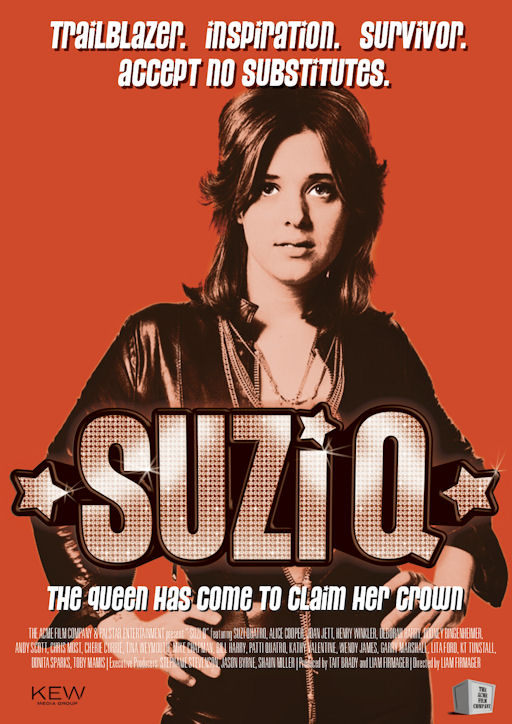 With theaters closed, Utopia Distribution will host a “Suzi Q” virtual event on July 1 featuring the film and an exclusive Q&A featuring Suzi Quatro and Special Guests TBA (available for 24 hours only) in advance of the film’s traditional release on VOD and DVD on July 3.

To buy your ticket for the July 1 event powered by Altavod, visit www.altavod.com/movies/suzi-q. For additional information about the movie, visit www.suziqmovie.com.