The Matrix 4 slips back another year 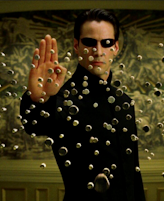 Delays are inevitable in the world of movies at the moment. With very few exceptions, no major productions have been able to film anything for the past three months anywhere in the world. That means that movies that were due to be released at the end of 2020 have slipped back until 2021, and films that should have been with us in 2021 are now being rescheduled for 2022 – which feels so far in the future that we might as well stop getting excited about them for the moment. Unfortunately, one of the most hotly-anticipated films of the past decade falls into that category, and that’s the fourth “Matrix” movie.

Back when everything was going to plan, and Hollywood was running on schedule, the fourth installment in the “Matrix” saga was penciled in for a release in May 2021. There had already been some amusement in the press about that release date, as it put the film within a week of the anticipated release of “John Wick 4,” and so it set the scene for a box office showdown between two flagship Keanu Reeves vehicles.

As entertaining as that would have been for everybody, that’s no longer going to happen. The fourth “John Wick” film has been pushed back to May 27, 2022, and the news about the fourth “Matrix” film is a little better than that, but not by much. Neo, Trinity and the rest of the gang won’t be back in action in their futuristic outfits until April Fool’s Day 2022. The date makes us wish that we could tell you this is a joke, but sadly it’s not. They say that good things are always worth waiting for, so let’s hope this movie isn’t an exception to that common parlance.

By the time the film – which is currently titled “Matrix 4” but will presumably have a snappier title by the time it reaches post-production – hits the big screens, it will have been a full 23 years since the original was released. In that time, it’s become a cinematic treasure, and one of the most beloved science fiction films of all time.

Even now, so many years after the third movie, you can still buy “Matrix” action figures. You can still even spend your money on the official “Matrix” online slots game with a no deposit bonus if you wish to. The mere fact that so many people are still attracted enough by the “Matrix” name to spend money on it at online slots websites says something remarkable about its staying power as a brand. If there’s a paying audience playing “Matrix” online slots games nearly a quarter of a century after the film was made, it looks to be a safe bet that there will be an even bigger audience willing to pay to see the new film when it arrives.

It’s been a busy time for “Matrix” star Keanu Reeves in terms of sequels. After resisting pressure from fans (and movie studios) to revisit some of his best-known and most-beloved films for many years, he’s recently agreed to do so not once, not twice, but three times. We’ve already talked about the development of the fourth “John Wick” film, but long before we see that we’ll see Reeves revisit the role that made him famous in the third “Bill and Ted” movie.

He may not be the ‘surfer dude’ that he once was in his early twenties, but the trailer of the film released to the internet recently is enough to confirm to us that Reeves still has what it takes to play the part convincingly. We have not seen any preview footage of the fourth “Matrix” film yet – possibly because not enough of the film had been shot before production had to be halted – but we’re sure that it will provoke just as much excitement when it airs.

Persuading Reeves to come back to “The Matrix” wasn’t easy for the people involved in the production of the movie. The actor is known to have a strong emotional attachment to the franchise, and has said in the past that he wasn’t interested in coming back to make a sequel “just for the sake of it,” because he thought that Neo’s story had been told, and there was nothing new for either himself or the character to explore. Clearly, something has changed between then and now, so what might that be?

Reeves has been giving a few details away in interviews recently, and it appears that for him, it comes down to two simple things. The first is the quality of the script, which he feels is full of new and exciting ideas, and the second is the opportunity to work with director Lana Wachowski again. Reeves has described the script as ‘beautiful’ and “ambitious,” and feels it has something to say about the times we live in as well as the somewhat-terrifying cyberpunk world of the films.

One of the biggest questions fans will have about the new film is how Neo (or Keanu Reeves) can be in it at all. Look away now if you’ve never seen the sequels to the first film, but from a storyline point of view, Neo is dead. You could even make an argument that Neo had never really been alive in the first place. By the end of the trilogy, we were all so confused about what was real and what wasn’t that we hesitate to say anything for sure, but when everyone walked out of the cinema after watching the third film, they were unanimous in the opinion that Neo had perished. Is this the original Neo, then, or a replacement generated by the matrix itself? Is it another simulation within a simulation? Are we going to have to get a map out so we can keep track of all this? We suspect that the answer to the latter question is “yes.”

Unfortunately, as we now know, it’s going to take us quite a long time to find out. We’ve waited this long though, so we suppose in the grand scheme of things another year isn’t going to hurt anybody.