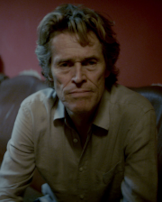 Somehow, while watching this film, there is an odd sense that we are somehow seeing real life or that this is a study of someone’s life, either the exterior of what is truly occurring, or the interior struggle of thoughts and fears played out on the screen. The writing is just a little too intimate and the acting a little too real not to be based on a true life.

So it was not surprising that in “Film Comment,” published by Film at Lincoln Center, I discovered that “Tommaso” is a loose autobiography of the life of Abel Ferrara, the director and writer. His wife and 3-year-old daughter have lead roles along with seven-time Ferrara collaborator Willem Dafoe. Abel Ferrara’s own flat in Italy is the setting for the film.

Like the tortured Tommaso, played by the ever-brilliant Dafoe, Ferrara sought refuge in an AA group for years of heroin addiction. Also like Tommaso, he met a beautiful young woman, around 30 years younger, and had a little girl. In the film, these things break into a combustible force and Tommaso slides into a personal angst that wracks his soon fragile emotional state.

Abel Ferrara’s work isn’t for everyone. While he began making films when he was around 16 years old, he has had his fair share of critical box office flops and controversy. A recognized expert in horror, addiction, and sex scenes, Ferrara adds some of the bizarre into this film that may be more figurative than real: women without clothing, temptations of infidelity, and crucifixion.

Ferrara unabashedly lays his life out before us, with its demons and suffering, examining the human condition through zeroing in on his own. Willem Dafoe has reported that the film is basically an improvisation. Ferrara tells Dafoe what he is imagining and trusts Dafoe to act it out. At center, there is a feeling that Ferrara believes that love is what gives a person meaning, worth, and value. So, his greatest fear is that he is unlovable.

“Tommaso” opened June 5 in New York City at Lincoln Center as well as at the Laemmle, Acropolis Cinema & Lumiere Cinema in LA. It is also available for online viewing through Virtual Cinemas at Kino Marquee: https://kinomarquee.com/tommaso.