Director Nick Murphy claims he chose the Hilbre Islands off England’s West coast as the shooting location for this film because, growing up there, he thought it would be a good place to hide a body. That may or may not be the case, but it turns out to be a very good place to shoot a film about the end of life on earth as we know it. This is a film about the dissolution of the human soul, the flaming demise of everything humans call life, burned on the pyre of the conscience.

The Hilbre Islands are about a mile off the coast, in the easternmost flat of the Irish Sea and at the mouth of the River Dee, just southwest of the River Mersey and Liverpool. There are few people on earth who could stand living with the fog, clouds and horizonless grey of this place where God could not make up his mind where the land ends and the sea starts. At low tide one can walk to the Hilbre Islands, at high tide they become true islands, sealed from land by one of the most forbidding seas in the world, the Irish Sea.

If this was one good decision by emerging director Murphy (best known for TV mini-series “Occupation”), choosing his leading cast from among the best actors in the world was another. Paul Bettany, Mark Strong, Brian Cox, Stephen Graham and Ben Crompton bring the ultimate in human trauma home in the brooding waves, the unceasing tides and the relentless rain.

Bettany and Graham play cop brothers Joe and Chrissy Fairburn, sons and heirs apparent to the legendary old days of the strong arm cop, ruled by their retired cop father Lenny (Brian Cox). Lenny rambles on, in a world of his own, spinning tales of bringing the bad guys to justice the old fashioned way, with the fist and the billy club. For the sons it is not so easy. In fact, for their old man it was never that easy, either, but it helps to romanticize in one’s old age. 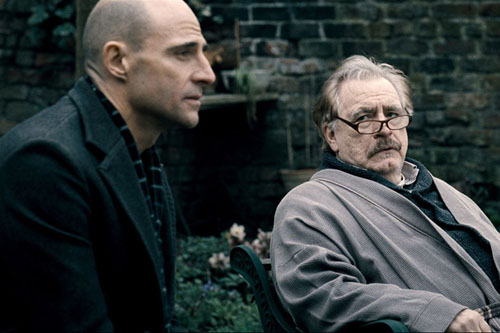 When a 12-year-old girl is brutally murdered, local oddball Jason Buleigh (played in an exceptional performance by Ben Crompton) is hauled in and questioned. After he is released for lack of evidence, older brother Joe Fairburn becomes obsessed with Buleigh’s guilt and the seeming inability of the police to do anything about it. As this obsession spirals into psychosis, he bullies his younger brother Chrissie into taking Buleigh on a ride to the island, the ride that their father told them guaranteed results. The result is that the two brothers entered into a nether land that will guarantee their lives will never be the same.

As evidence of foul play starts piling up, colleague cop Robert Seymour (Mark Strong — Jim Prideaux in 2011’s “Tinker Tailor Soldier Spy”), who was bullied by the Fairburn family all his life, starts collecting more information. The story that unfolds leads him on a stronger and stronger trail that threatens to spell the destruction of the family, and take a huge piece of the town’s fabric with it.

This film is not a mystery thriller; it is a psychological thriller, because award winning TV series writer Bill Gallagher chooses to let the audience in on the secrets as soon as they are divulged in the screenplay. This clever and eminently entertaining point of view puts the audience in the driver’s seat and gives the film a remarkably open and straightforward feeling. Rather than wasting brain cells trying to figure out a whodunit, the audience is free to feel the heat radiate from the screen as Bettany and Graham struggle to maintain what shreds of their sanity and dignity remain as the vise closes in on their pathetic mortal souls.

Exactly the opposite of being on the outside, with the legitimate police, assigning guilt, we are on the inside with the perps, fearing for our lives as our options drop, one by one. 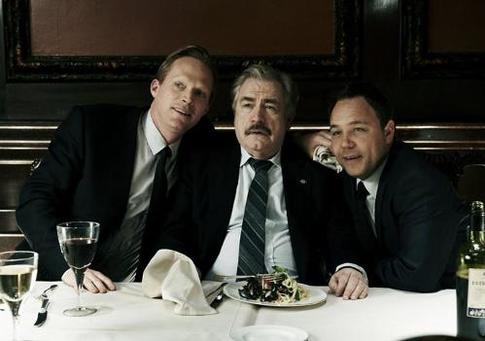