Review: Factory of One 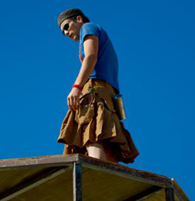 This film’s subject epitomizes a crazy west coast experience that culminates in an annual effigy-burning ritual, a phenomenon of anarchical, free-spirited, innovative San Franciscans who in 1986 were bent on combining psycho-transformation, paganism and freedom theology. In its own literature, Burning Man — the name of the week-long event — loosely defines itself as an “annual experiment in temporary community dedicated to radical self-expression and radical self-reliance.”

The event takes place during one week in an unbecoming flat, hot, windy hell called Black Rock Desert (about 110 miles north of Reno, Nevada). It begins on the last Monday of each August and expects more than 49,000 people this year at a cost of $380 per person.

Typifying the creative, self-fulfilling and psychic exploration of the sweltering Nevada desert event, “Factory of One” explores one Portland engineer’s personal journey to the BM experience. After a couple years of experimenting he designs The Emerald City, a shiny green installation of towers he hopes to reconstruct at the event. Inside the EC, complete with Oz signs, his friends plan to offer free creative haircuts. Crazy.

John Dowell’s journey, beginning with a hectic four-month schedule of nightly preparation in his garage, is what I imagine as an engineer’s dream-come-true. Each evening after work he comes home to weld the many parts of this fanciful creation that he plans to dismantle, cart in a U-Haul to Burning Man and then, with the help of the community there, reassemble in creative glory, almost like the BM statue itself that is erected and then destroyed in a conflagration. Dowell’s plan differs in that he will dismantle rather than destroy his creation and then work to make it better year after year.

The driven Dowell explains, “There’s never been a moment in my life when I thought I wouldn’t be an engineer.” However, it’s adding the fanciful, artistic side of the engineering process that excites him. Often friends come to his family’s lovely Portland house to help out with the creation in the garage. He is bathed in creator’s anxiety about his project every conscious second.

Dowell says that he’s going to see how far he can take his engineering dreams. He’s just going to let himself go and do this no matter what gets in his way. He says with commitment and passion about his nightly sacrifice after a hard day’s work, “I’m here because I like doing this.”

The actual effigy of the wooden man to be burned is a rite the BM website explains as an opportunity where “some bring bad memories to sacrifice, others are drawn as moths to flame to watch the conflagration, and for others yet, it becomes their new year, as a fire bright cleans out the old and creates a spiritual space for a new year’s growth. The evening that the Man is burned marks an ending and a new beginning.”

For Dowell, that fire might represent the celebration of his emerging artistic spirit and the recognition of his installation art that thousands come to observe. 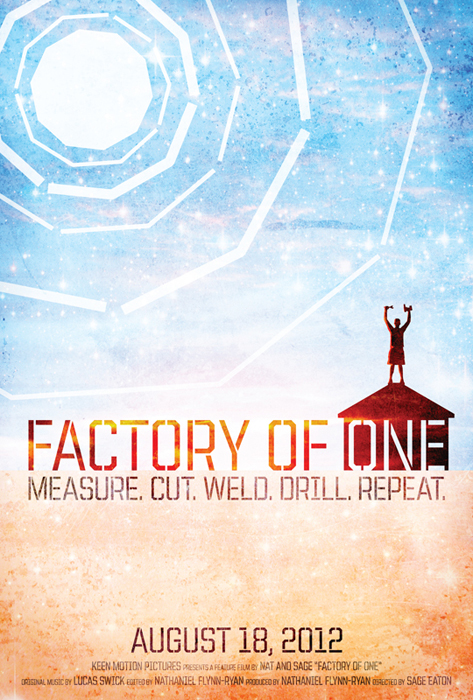