Poster and Trailers for Riddick 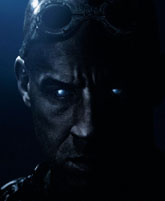 With many fans awaiting the next chapter of Riddick’s story due out in theaters on Sept. 6, we have a new poster and two new trailers below for you. Although the plot synopsis is quite similar to the first (and second) film(s), writer/director David Twohy and Vin Diesel promise an R-rating for the next film, which means more action for the fans.

Once again, Riddick is left for dead on a deserted planet with nothing but the creatures that haunt a person’s nightmares. Riddick activates a beacon that calls bounty hunters and mercenaries alike to the planet to catch the prize: Riddick.

Riddick is captured by one group of mercenaries and as he is about to literally lose his head, alien creatures disturb the night. Now, if you were a merc who was unable to see in the dark, unlike your captive, what would you do? Like these bounty hunters, I would probably release him and see what he can do to save my hide. Madness ensues and Riddick is once again fighting for his life, not only from the mercenaries but also from the creatures that lurk in the dark.

“The Chronicles of Riddick” did a decent job of linking “Pitch Black” into the story line and closing those ties off as well. Too bad Alexa Davalos didn’t make it to the end of Chronicles, but at least that story line was finalized before moving on and showing us that our antihero Riddick is still human after all.

Riddick asks, “You’re not afraid of the dark, are you?” Maybe we should be. There are many things lurking about on that planet.

The latest chapter of the groundbreaking saga that began with 2000′s hit sci-fi film “Pitch Black” and 2004′s “The Chronicles of Riddick” reunites writer/director David Twohy (“A Perfect Getaway,” “The Fugitive”) and star Vin Diesel (the Fast and Furious franchise, “xXx”). Diesel reprises his role as the antihero Riddick, a dangerous, escaped convict wanted by every bounty hunter in the known galaxy.
The infamous Riddick has been left for dead on a sun-scorched planet that appears to be lifeless. Soon, however, he finds himself fighting for survival against alien predators more lethal than any human he’s encountered. The only way off is for Riddick to activate an emergency beacon and alert mercenaries who rapidly descend to the planet in search of their bounty.
The first ship to arrive carries a new breed of merc, more lethal and violent, while the second is captained by a man whose pursuit of Riddick is more personal. With time running out and a storm on the horizon that no one could survive, his hunters won’t leave the planet without Riddick’s head as their trophy.