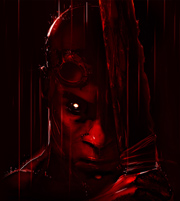 Nearly 10 years after we have last seen the character, and 13 years since he first appeared onscreen, Vin Diesel is back in the role that was his first lead role in Hollywood: Richard B. Riddick. Continuing on in the “Chronicles of Riddick” franchise, Vin Diesel is prepared to give us another action-packed adventure — along with longtime series advocate David Twohy, who has written and directed all three films in the series-.

“Riddick” takes the harsh and stripped-down butt-kicking style from “Pitch Black” and infuses it with all new aliens, an unknown planet and, of course, lots of new victims … I mean co-stars … to fight alongside him.

“Riddick” opens with our titular hero once again alone on a deserted planet. He is betrayed and left for dead by his companions on a planet that he was hoping was his home of Furya, which it turns out not to be. For a while, he survives the harsh landscapes and crazy creatures that look like jackal zebra hybrids and mud-loving scorpion monsters, but he is still hiding out there when he sees a threat in the form of a wild storm that is coming and decides he needs to get off this planet as soon as possible. He uses a homing beacon at an abandoned outpost to alert a few mercenary bounty hunters groups to his location with the enticement of his capture. Unbeknownst to them, the whole reason they’re there is to help Riddick get off this world, and fast.

As the night falls and the storm approaches, Riddick hides in the shadows until he can team up with the merciless mercenaries – some of whom have a personal vendetta against Riddick. They will need to work together to have any chance of surviving this planet. But when it comes to Riddick, no one can be trusted as they still bicker, fight and kill each other in the process.

I was a big fan of “Pitch Black,” which was my introduction to Vin Diesel in his first lead role and he stole that movie entirely. Then came the “Fast & Furious” franchise, which made him an even bigger star, but I am glad that he chose to continue this franchise after the comical disaster that was “Chronicles of Riddick.” Vin Diesel has so much faith in this film that he nearly went broke putting in his own money to ensure that the film fans wanted to see got made.

It was filmed in 48 days for a fairly low budget of $35 million dollars. It has an R rating, something Diesel personally fought for against Universal pictures, which wanted to tame down the action and gore to go for the safer PG-13 rating. This was clearly a labor of love for the star and you can tell by how much he risked to make sure fans got to see this character again.

My verdict is that although “Riddick” seems like a distant cousin to “Pitch Black,” the film goes for blood when it comes to the action, but lacks any sort of development with the side characters in the film. The movie goes for smaller close-quarters combat as the interaction and fight scenes between characters seem intimate as opposed to the large scale seen in “Chronicles of Riddick.” While “Riddick” isn’t my favorite film in the series (it comes in at second), the movie has everything fans have come to see, a true anti-hero kicking some serious butt and escaping the insurmountable odds stacked against him.

The smaller scale of everything can seem jarring compared to the massive visuals previously seen — and the landscapes do look amazing — it’s just when there are legions of creatures that are obviously CGI that the film fails to deliver top-grade animation. The movie does use practical effects and puppets in the close ups that are believable, but the fields of mud-dwelling creatures seem cartoonish and rushed. 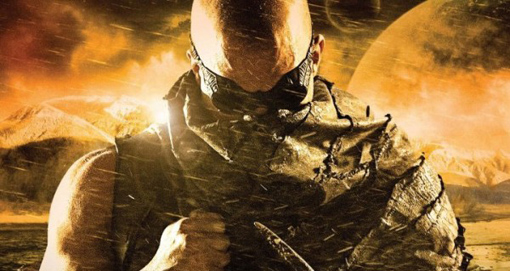 With many newcomers and very little character development for them, it is hard to find many standouts in the cast, but there were a few I was impressed with. Dave Bautista as mercenary Diaz was fun to watch and brought some comedy to the film. It was great to see him and think that this might be a preview of his character Drax the Destroyer from the upcoming Marvel movie “Guardians of the Galaxy,” which is currently filming and due to be released August 2014.

One other character that stood out – and not just because she was the only woman in the film, but also because she bared all and went for it when it came to her character — was Katee Sackhoff as officer Dahl. She is clearly one tough gal who holds her own against the tough guys and was credible in her role. Also good was Matt Nable as Boss Johns, the leader of the second crew to arrive in an attempt to capture Riddick. This was the military trained group that had the discipline the first crew seemingly lacked.

Jordi Mollá plays the slimy leader of the non-military mercenaries who was a caricature of everything that can be wrong with a man and the actor does his part well in making the audience loathe him. Honorable mentions to a few castmembers who made appearances in the film go to Karl Urban as Necromancer Vaako and Nolan Gerard Funk, who was one of the few characters that maintained his casual demeanor and showed a good heart.

“Riddick” has plenty of action, but I felt myself bored at certain points. It does keep the questions alive that we have always asked of this character though, “Where is Riddick from?” and “What are his true origins?” There was just a quick flashback to show how Riddick went from being King of the Necromancer to being nearly dead on this planet and then the film moves on.

The story is very simple and should be pleasing for most fans, but it fell short in delivering what I really wanted to see and although I enjoy aspects of it, I feel after thinking about it that I might not have been so happy paying premium prices to see the film, especially in IMAX. It is with that realization that I cannot give a solid recommendation for everyone to see the movie and it really is a toss-up for most whether you will like it or not, so watch at your own risk. 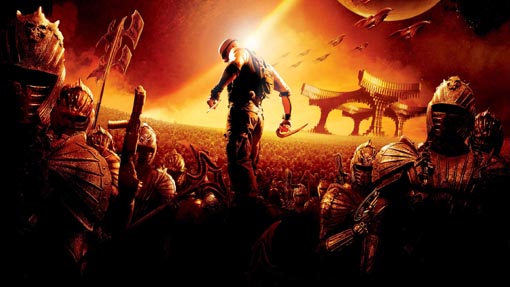