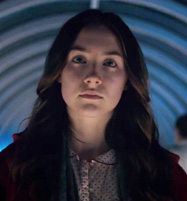 Vampire stories have been all the craze, so pardon me if I don’t get especially thrilled when I hear of a new one about to be released. My biggest concern with any new vampire movies to hit the screen? They try so desperately NOT to be “Twilight” that I fear the story telling gets lost on the way. Neil Jordan’s “Byzantium” is a vampire flick slated for June, and I just can’t seem to get excited, and I’m a sucker for vamp stories.

In the same manner that any new vampire films have the obstacle of focusing too much on not being “Twilight,” as do movie watchers who now spend a good portion of their energy trying not to think or compare these pictures to said tween phenomena. It really is unfair that this genre is now more than ever an underdog.

“Byzantium” – which stars Gemma Arterton, Saoirse Ronan and Sam Riley — has a few setbacks working against it. It’s a British-Irish film, which means US media is thin. However, this can actually sometimes be a positive for film buffs who seek out offerings of different cultures. Film festival reviews have not pegged “Byzantium” as a high rated screening. It did decently but didn’t snag any spotlights at Tribeca. Does this mean that it’s not worth checking out? Maybe not, but it definitely affects a target audience.

Even before people know what the film is about, the general tendency is to eyeball reviews and ratings from peers (thank you, social networking). If these ratings and reviews aren’t stellar, some may pass the synopsis clean by. So what’s the deal with “Byzantium?” A mother daughter duo with a long stretching past, (I don’t think I need to paint a crimson picture of what that hidden past is) seek refuge in a coastal resort. Their past inevitably catches up with them, romances ensue — as expected with two female leads — and I can presume people die. The most interesting thing, for me, is the concept of the mother daughter relationship. Stereotypically speaking, usually a male is thought of as a vampire. I’m not saying women haven’t had prevalent roles as vampires, but its interesting to me to see two women living the eternal life.

The trailer for “Byzantium” is really its savior. The film’s cinematography is eye catching. The scenery is captured in a serene light and it appears as the blood used is merely for artistic splatterings. I really enjoy the look of the film. The score, from what I could gather from the trailer, seems eerie and has that sense of haunting beauty. I think it complements the visuals accurately and not over-dramatically.

My issue with the trailer is this: even in the short span that a preview runs, I got the sense that the film isn’t sure which direction it wants to lean. Teen vamp flick? Perhaps. A throwback to nostalgic vampire tales? Maybe. I am left with the question, will the melding of current and traditional stylings work in a film such as this?

Will I see “Byzantium?” Yes, I will. I can’t truly analyze a film based on a trailer, so I always try to see films even if they aren’t necessarily high rated or media forefronts. I am curious about this one. I want it to be good. By no means will I rush to find a select theater that will be playing the film on opening weekend, but I will keep an eye open for it.

At the end of the day, one thing still holds true when examining this genre — you can’t take it too seriously. Take these films for what they are, and enjoy the ride, because even a bad vampire film still has vampires in it, and sometimes that’s all I need.