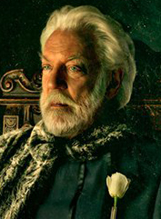 Lionsgate ends the run of Capitol Couture portraits with none other than “His Eminence” who is “adored by all” (or rather hated by all) President Snow, played by Donald Sutherland in this portrait exclusive to Yahoo! Movies.

There is a silent rebellion rising up in each of the districts since the finalization of the 74th Hunger Games that Katniss Everdeen (the recently-crowned Best Actress Oscar winner Jennifer Lawrence) and Peeta Mellark (Josh Hutcherson) sparked as they defied the Capitol in a last attempt to see the end of the games. President Snow doesn’t quite believe the ruse that Katniss and Peeta are in love, but he is willing to let them live for the time being. It would be quite difficult to simply eliminate the symbol of this rebellion without anyone noticing, right?

But, the rest of the rebels have taken to the Mockingjay as their symbol and Katniss has really given the citizens something to root for with the upcoming Quarter Quell. What could President Snow have up his sleeve as he poses for this portrait? The white rose to hide the distinct smell of blood and the powerful stare that Snow produces, tells me that he is not fooled by the seemingly foolishly in love young woman that is Katniss Everdeen. 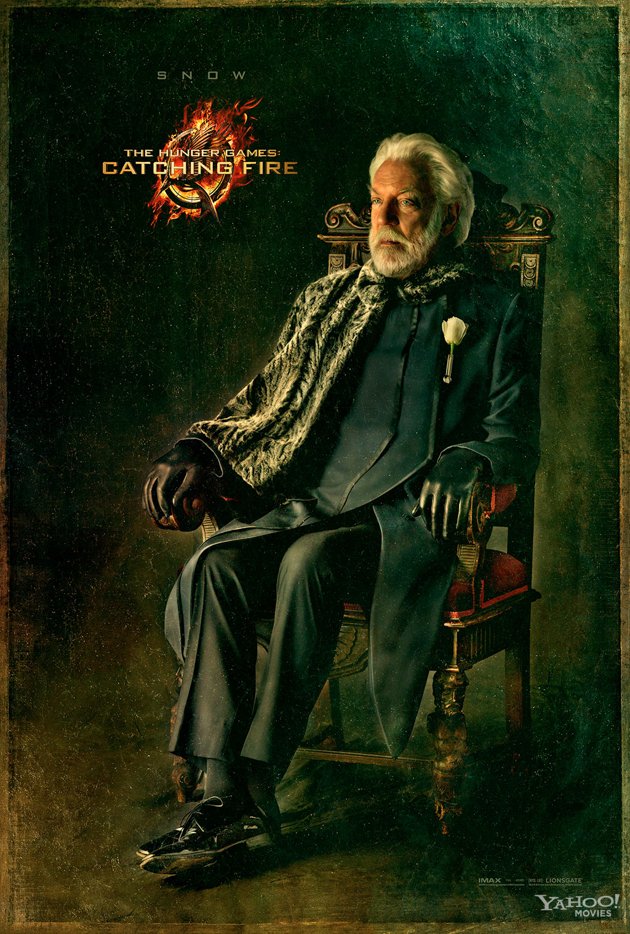 Many people were not quite convinced with Donald Sutherland in “The Hunger Games,” but I thought Sutherland was a superb casting decision. I am glad that he is returning for the following films. Sutherland effectively portays the calculating and treacherous snake that Suzanne Collins describes in the novel, and I can’t wait to see the direction “Catching Fire”‘ will take with a new director as well as a new screenwriter.

Check out the rest of the Capitol portraits of Effie Trinket, Ceasar Flickerman, Cinna, Haymitch Abernathy, Johanna Mason, Finnick Odair, Peeta Mellark and Katniss Everdeen HERE. Let us know what you think of this bit of marketing flair that Lionsgate has managed to pull off quite well by using social media and other internet site to help them spread the word.