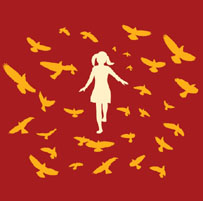 There is no mother, no charismatic leader and no NGO whispering inspiration to the nine little girls featured in “Girl Rising.” They simply rise up, say no to their circumstance, and through uncanny determination, attain their goal.

Let me explain through telling the story of one girl. Suma was born into a family of boys. Each boy was favored by his family and sent to school. She was sold, at 6 years of age, as a servant. This practice, called kamlari, is illegal in her country, but an old tradition.

When she grows a little older, the family she is working for sells her for an increased fee because she is more mature and trained. The next family engages her in harder work and routinely humiliates her. After a few years, they are also able to sell her for a profit. At her third family’s house, a border there is a teacher who takes her to a night class where she learns to read and write.

The third family ends up liberating her. Then, she coordinates with other girls and creates a movement to end the illegal practice of selling girls. To encourage respect for this law, the girls gather at dusk outside the house of any family refusing to release their slave girl. Together, the girls sing the poetry of our leader which alerts authorities and neighbors – embarrassing the slaveholders and potentially adding yet another girl to her new group of freed women who can now work for a wage, attend school, marry and even join her group of serenaders for liberty.

Another story of rising is the way this movie is being distributed. Everyone knows that “Hollywood” has a monopoly on film distribution. An independent film has few ways to get in the circuit. However, a new organization has been created called Gathr. Indie films sign up with them and they spread the word that certain films are available.

I received word that “Girl Rising” would become available on March 6. I checked in with my Peace and Justice group and we agreed to help promote the movie. If we could get 150 people to sign up for tickets within three weeks, the movie would show at the best theater in town on the day and time of our choice. Within about 10 days, promoted by BSLC Peace and Justice Ministry, Dining for Women, Women Build – Habitat for Humanity and the Vancouver Peace and Justice Fair, 250 tickets were reserved which completely sold out the house.

Of course, seeing the movie is not enough. Women throughout the world are begging to be educated, but governments in most developing countries are not providing enough opportunities. In Bangladesh, public schooling is offered on a rotating basis for two hours a day to sequential groups of children in overcrowded little rooms. In Afghanistan there are too many outlying villages with no transportation for a girl to safely attend.

So, a bigger opportunity Gathr provides groups like mine is a forum from which to encourage donations to vetted educational projects.

To see if “Girl Rising” is showing at a theater near you, or to sign up as a movie captain yourself, click on Gathr.