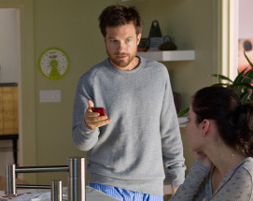 The fact that you are reading this means that you are relying on technology — either by Smartphone, computer or tablet, you are dependent on the internet for information or social connections. Whether you want to admit it or not, the internet has changed the way we experience the world and how much of you is exposed to the world as well. It is this dependency that makes the series of stories in director Henry Alex Rubin’s “Disconnect” all that more frightening.

There are a series of stories and they seem to be connected in some way. Of course, the obvious correlation would be to compare it to 2004’s “Crash,” which was a phenomenal film that has since tried to be duplicated but never as successfully as the original.

“Disconnect” tells a series of stories that deal with everyday online interactions and are based upon true events. The movie is a dark revelation to the dangers that what you do on the internet effects yourself and those around you more than you know.

Watch the trailer for “Disconnect” here:

After watching the trailer, you can see how everyday actions can dramatically change your life in ways you never expected. Anything from entering a chat room, to looking for companionship online, to playing a practical joke or just putting too much of your personal information online can lead to disastrous results.

Without getting too much into the specifics of each of the stories, I can say that a strong cast has been assembled with a director with an unique vision and a message he wants to convey. It is obviously going to be a cautionary tale, much like 2011’s “Trust,” which takes something we use constantly and rips it open for you to see the disgusting underbelly of scenarios that happen when caution isn’t used.

What do you think of this trailer and which scene sticks out to you? Leave a comment and let us know whether “Disconnect” seems like an interesting film you would be interested in checking out upon its release.