Catching Fire: Wiress has been Cast 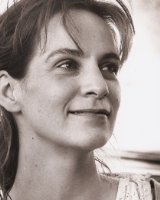 The clock is ticking until production begins and there has been a furious casting race for the sequel to “The Hunger Games: Catching Fire.” Well, another big domino fell when the filmmakers announced that Academy Award-nominated and Tony Award-winning actress Amanda Plummer for the role of Wiress. Plummer is best known for her roles in “The Fisher King” and “Pulp Fiction” and would be a great fit for the film.

Wiress is a former Tribute of District 3 who is unable to communicate in the most conventional manner. However, in the end her observations and contributions in the arena during the Quarter Quell are pivotal to the survival of Katniss (Jennifer Lawrence) and other tributes of the 75th Hunger Games. Wiress gained the nickname “Nuts” by the other Hunger Games victors for her eccentricities. Even though she seems mad to most, there is method to her madness that only a few can understand.

Tick. Tock. It’s a clock, and Lionsgate is still having a difficult time deciding who they want to play the coveted role of Finnick Odair in the second film. Initially, fan favorites Armie Hammer, Garrett Hedlund and Taylor Kitsch hit the forefront, but it seems another actor’s name is being tossed into the rink as Sam Claflin of “Snow White and the Huntsman” is now in the running. Only time will tell where this will lead, but we’ll keep an eye on it and see who the studio decides on for the role. With so much speculation, it’s kind of hard to keep track of the different names being tossed in and out of the circle.

While Wiress has been cast, her counterpart Beetee is close to being cast. Rumor has it three-time Emmy Award-winner Tony Shalhoub (“Monk”) is a front-runner for the role. Meanwhile, Melissa Leo (“The Fighter”) was reportedly on the shortlist for the role of Mags, but her reps were quickly informed that Leo would not get the part so we’ll see where casting decisions lie as production time nears.

Beetee is an inventor who Johanna Mason nicknames “Volts” for his incredible talent of creating deadly weapons out of what would seem to be simple wire. Together with Wiress, they were “Nuts and Volts.” Shalhoub, in my opinion, would be fantastic as Beetee. His ability to bring a character to life is beyond words at times and for me would be very believable Volts.

At this point, Plutarch Heavensbee (Phillip Seymour Hoffman) and Wiress (Amanda Plummer) are the only new characters whose casting are been confirmed by Lionsgate. We’ll keep an eye out for other casting news and we’ll report it as soon as we can.