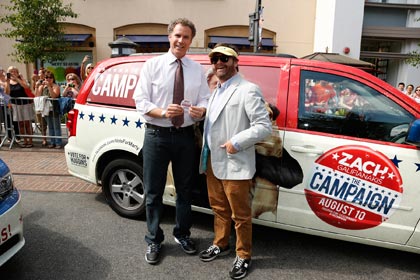 Will Ferrell and Zach Galifianakis have hit the road to meet fans and talk about their roles in “The Campaign” as rival candidates who will stop at nothing to win an election.

The actors began the campaign trail July 17 at The Grove in Los Angeles, joking with fans and fielding questions at a press conference that focused on their roles as out-of-control political rivals. The event launched an 11-city whistle-stop tour of public appearances that will travel the two across North America through July 31.

Ferrell and Galifianakis next touched down in St. Louis on July 17. On July 18, they appeared in Dallas/Ft. Worth and Chicago; on July 19, they campaigned in Chicago and Seattle; and yesterday, July 20, they were in San Francisco.

The second leg will then take them to Boston and Toronto on Monday, July 30; and on Tuesday, July 31, appropriately enough, they will wrap with visits to Philadelphia and Washington, D.C.

Among the trip’s highlights, Ferrell and Galifianakis coached opposing teams in a ferocious tug-of-war contest at the Naval Air Station Joint Reserve Base in Ft. Worth, Texas. At Chicago’s famed Wrigley Field, the two threw out dueling first pitches at the Chicago Cubs/Florida Marlins game. In Toronto, they will visit Canada’s beloved Hockey Hall of Fame, where their arrival will coincide with the arrival of the also-touring Stanley Cup. In Philadelphia, they will don tricorn hats and attempt to recreate the signing of the Declaration of Independence and finally, in D.C., pose for photos at the U.S. Capitol. Other events will be announced locally.

“The Campaign” opens in theaters nationwide Aug. 10. You can see the film’s trailer, poster and more HERE.

About the film:
Will Ferrell and Zach Galifianakis star as rival North Carolina congressional candidates out to bury each other in this mud-slinging, back-stabbing, home-wrecking comedy from “Meet the Fockers” director Jay Roach, that takes today’s political circus to the next level. Because even when you think campaign ethics have hit rock bottom, there’s always room to dig a whole lot deeper.

Tags: "The Campaign", Will Ferrell, Zach Galifianakis
Posted 21 Jul 2012 by Admin in News